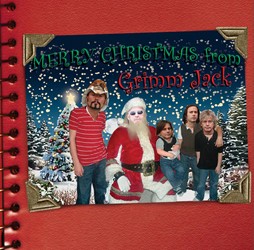 New York rockers Grimm Jack have re-issued their holiday single “Merry Christmas To You”, making the song available digitally for the very first time via iTunes.

Guitarist Jimmie Mack tells SleazeRoxx.com, “We actually recorded the Christmas song 20 years ago. It was a Grimm Jack song called “Crush On You”. I reworked the lyrics to make it a Christmas tune. I always thought it was cool that The Beatles made a Christmas flexi record for their fans every year. We put this out (on a red cassette!) over 20 years ago — we received a lot of radio play on it at the time. We decided to re-release it with a Christmas message and included the extended mix that breaks down into a blues ending. Dave (Leeds, drummer) saw a photo of a family with Santa and photo shopped our heads onto the kids bodies for the cover.”

Grimm Jack will head back into the studio right after the holidays to record the rest of their upcoming album, including new songs such as “Skin And Bones”, “Hold On” and “Satan’s Twister”. The band made their return in early 2012 with the three song EP ‘Damned’.

The Grimm Jack story began in 1985 with guitarist Jimmie Mack and drummer Dave Leeds, two Long Island rockers who joined forces to create a contemporary rock band with an edge. Throughout the years they would release the ‘Go For Your Guns’, ‘Partners In Crime’ and ‘Jailhouse Tattoo’ EPs before drifting apart in the mid ’90s.

In late 2009, Grimm Jack co-founder Jimmie Mack began working with singer Billy Kohout (who originally joined the band in 1988) with the idea of releasing material recorded several years earlier that was never made public. It wasn’t long before Mack and Kohout realized that Grimm Jack wasn’t just about the music, but about the musicians themselves, and most importantly — the countless fans who have kept that music alive for nearly twenty years. With the return of Dave Leeds and guitarist Tom Lestat four-fifths of the classic ‘Jailhouse Tattoo’ line-up were back, complimented by new bassist G.G. Zen-Garten.