Speaking exclusively to Sleaze Roxx, Kohout provided an update on what has been going on in the Grimm Jack camp. Kohout indicated: “We’re really excited to release this new album Snake Oil & Skullduggery. The album is mostly complete at this point, 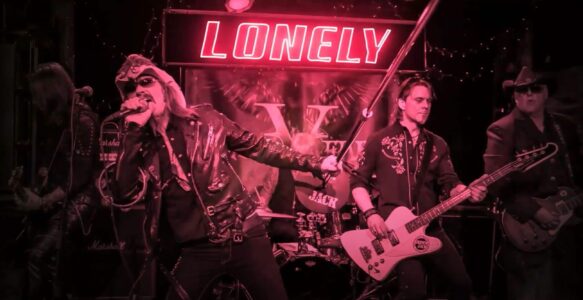 and we’re slowly releasing singles from it on all streaming services. Our first single “Hang Down” has met great success with close to 130,000 plays on Spotify. I’m ready to get back into the studio and do vocals on the final track, “Devil In Her Veins.” It’s an epic seven minute power ballad unlike anything we’ve ever done before, and a perfect ending to a monster of a record.

This collection of 11 songs took longer than we ever anticipated — a little over five years to complete due to some unexpected, and unfortunate circumstances. Covid for one, and a few member changes played a major role in this. First, there was the departure of long-time lead guitar player Tom Lestat. He left amicably for personal reasons, but nevertheless, we found ourselves in a tremendous lurch, just as we were ready to start recording basic tracks for this new record with him. Original drummer Dave Leeds did most of the drum tracks on this album, but after a long tenure with Grimm Jack, he decided to part ways as well. Fortunately, the rock Gods smiled graciously upon us, and our good friend Rob Noxious of the renowned band Killcode stepped in and finished up the remaining drum tracks.

We were lucky enough to find Joey Masters in a few short weeks to fill the lead guitar spot, but it took some time to get solid enough to start recording an album together. We wrote some new songs, rehearsed a lot, and played out as much as possible live to gel and speed up that process. Then an amazing unforeseen thing started to happen. These songs started to take on a different feel and vibe to them. We slowly but surely were redefining the Grimm Jack sound. Somewhat of a departure from the last record we did, but still clearly Grimm Jack. I’d describe it as a vintage 1970-1975 hard, heavy, pop and rock sound. Joey Masters was a very big part of that shift.

The other driving force was Bob Standers at Parcheesi Studios in New York. I can’t say enough about him and how his vision molded the sound of this album. We were heading in a very different direction, and decided to use a different studio then where we recorded Thick As Thieves. A changing of the guard if you will. With Bob producing, engineering and mixing this record, I believe it’s our finest work to date. It’s a very old school sounding rock album using minimalistic amounts of Snake Oil & Skullduggery that’s all too commonly overused with todays recording technology.”