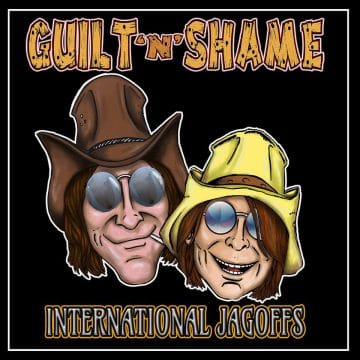 Guilt ‘N’ Shame describe themselves as follows on their Facebook page:

Wikipedia states the following about Vie‘s time in Enuff Z’Nuff from 1993 to 2013 (with slight edits): “A short time after Enuff Z’Nuff parted ways from Arista Records, guitarist Derek Frigo left the band, though he still recorded on occasion with them. Despite this setback, the band continued touring and recording, releasing albums on several indie labels and finding a solid fanbase overseas. Some notable events include many appearances on The Howard Stern Show, local appearances on the Mancow’s Morning Madhouse radio program, a 1998 performance on The Jenny Jones Show, a pair of features on VH1 about hair bands in 1999, and attaining an opening slot for Poison‘s 2001 “Glam Slam Metal Jam” tour.

Lead singer and songwriter Donnie Vie stopped touring with the group in 2002 out of frustration and to embark upon a solo career. Enuff Z’Nuff continued to tour in his absence as a “3-piece,” with their lead guitarist Johnny Monaco also serving as the band’s lead singer. Despite not touring, Vie would still write and record with the band in future studio releases.

In 2004, former lead guitarist Derek Frigo died from an apparent drug overdose at the age of 37, soon after the band planned a Japanese tour with the original line-up. Another tragedy struck when the band’s drummer Ricky Parent lost his long-time battle with cancer in October 2007. Parent had been with the band for approximately 12 years….

In 2006, original members Chip Z’Nuff and Donnie Vie reconvened to shoot a pilot for the VH1 reality television show, Bands on the Run. The show’s pilot episode never aired. However, during that time the reunited band held their initial recording sessions for their 12th record. Several songs from these sessions eventually resulted in their latest studio album of new material, Dissonance, which also features former Ozzy Osbourne / Badlands guitarist Jake E. Lee on guitar. With Vie rejoining the live shows in 2008, Dissonance was released in 2009 in Japan, with a U.K. release following in 2010. In support of the album, Enuff Z’Nuff toured both Japan and Europe, including the Download Festival in the U.K. As of May 2013, Donnie Vie once again left the band. Johnny Monaco returned to Enuff Z’Nuff as the band’s singer.”

We wanna thank our thousands of fans all over the world. Somebody told us we need to make a God Damn record and get an advertiser. Well we ain’t rich and it …