Guitarist Adam Hicks no longer part of One Bad Son

Canadian rockers One Bad Son have lost one of their original band members as Adam Hicks has decided to step down from his lead guitarist position. This leaves singer Shane Volks and drummer Kurt Dahl as the remaining original members left in the group. Hicks played on all of One Bad Son‘s albums consisting of This Aggression Will Not Stand (2006), Orange City (2007), The Rustbucket EP (2010), One Bad Son (2012), Black Buffalo (2014) and Made In The Name of Rock n Roll (2017). 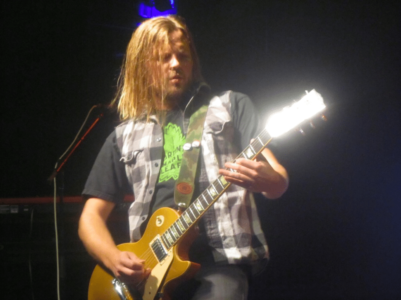 The following message was posted by Hicks on One Bad Son‘s Facebook page earlier today:

“For seventeen years I have been part of an amazing Rock n Roll band. Playing, writing and growing up in One Bad Son has made me who I am. So it is not easy to announce that as of today I will no longer be in the band. For me, it is time for change and new endeavors. There is absolutely no hard feelings. Shane and Kurt are still like family. They have been extremely supportive throughout this decision of mine. Thank you boys.

There are so many great people who have guided and supported me on this journey. It’s hard to express how much gratitude I have for you. I sincerely thank you all.

For our fans, I know this may be hard for you, it is for me. You have given me so much. I feel like we have experienced something very special, together. But, this is the right decision and I know I have your support. I thank every single one of you.

One Bad Son was my life, and music still is. I wish the guys all the best going forward.