Guitarist Adrian Vandenberg reunites with Whitesnake for a few songs

Blabbermouth has reported that former Whitenake guitarist Adrian Vandenberg joined Whitesnake onstage at a show in Tilburg, The Netherlands on August 11, 2016. Excerpts from the Blabbermouth article state: 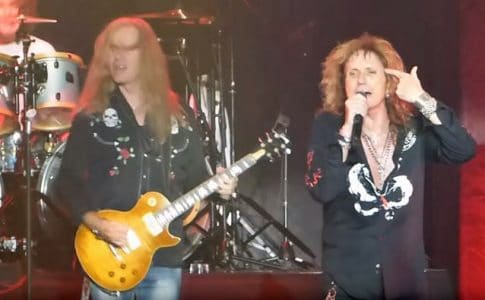 WHITESNAKE was rejoined on stage by former guitarist Adrian Vandenberg during the band’s headlining appearance yesterday (Thursday, August 11) at 013 in Tilburg, The Netherlands. Fan-filmed video footage of his appearance can be seen below.

Asked in 2014 interview if he could ever see himself working with WHITESNAKE mainman David Coverdale again in some capacity, Adrian told FaceCulture: “David and I always talked about it. Sooner or later, we’re always gonna do something together because we just really enjoy it — whether it’s something acoustic or a blues album or whatever. That’s definitely something, sooner or later, we’re gonna dive into when the time is right, of course, because he’s got WHITESNAKE and I’ve got VANDENBERG’S MOONKINGS. And sooner or later, there’s gonna be, like, a gap somewhere where we think, ‘We’re gonna drink some great wine and write some good songs together and do something with it.'”

describes Vandenberg‘s time in and with Whitesnake as follows (with slight edits):

Adrian van den Berg was originally approached to join Whitesnake in the early 1980s, having impressed David Coverdale with not only his guitar wizardry, but also with his songwriting talent and his ability as a band leader. He initially declined, due to the success of his own band Vandenberg and their Top 40 hit, “Burning Heart.” By 1986, however, with pressure from the record company to become more and more commercial and their success hitting a plateau, he relented and finally disbanded Vandenberg, agreeing to join Coverdale in Whitesnake. Initially, he was hired as a session musician, helping to complete their eponymous album Whitesnake (known as 1987 in Europe) after a mass-firing of the original band members by Coverdale. He contributed the solo to their No. 1 hit “Here I Go Again,” but guitarist John Sykes played all of the other lead and rhythm guitar on the album.

After an extremely successful world tour and extensive airplay for their 3 videos on MTV, van den Berg co-wrote all of the music to the follow-up album Slip of the Tongue. However, in preparing to enter the studio for the recording sessions, he injured his wrist performing isometric exercises and was unfortunately unable to contribute lead guitar work to the album Slip of the Tongue. Steve Vai was imported by founder David Coverdale to record both lead and rhythm guitars on the album instead of van den Berg‘s. Van den Berg healed in time to stay with the band on tour supporting the album in a now-trademark dual guitarist role with Steve Vai. After Whitesnake was disbanded in 1991, he returned as part of other Whitesnake incarnations such as the 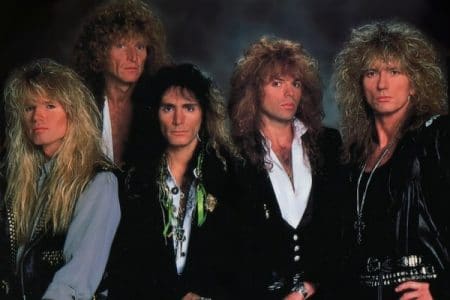 1994 Whitesnake‘s Greatest Hits reunion/tour. He once again co-wrote the songs for the 1997 album Restless Heart with Coverdale. This time, he played all of the guitars on this stripped-down, bluesy album, turning away from his well-known rock/metal neo-classical chops and towards his original main influence, Jimi Hendrix. He also collaborated with Coverdale on the Whitesnake unplugged acoustic album, Starkers in Tokyo.

He has since returned to painting and is an accomplished airbrush artist, having created the cover art for both the Heading for a Storm and Alibi albums.

When Whitesnake play in van den Berg‘s home country, the Netherlands, he makes a “surprise guest appearance”; he did so at the June 2008 Arrow Rock Festival in Nijmegen, where he joined the current line-up for a performance of “Here I Go Again”. He also played with them on the Sweden Rock Festival in 2011 along with Bernie Marsden.

Coverdale suggested that he and van den Berg should probably do an acoustic Whitesnake tour in the far future.”

Whitesnake playing “Here I Go Again” and “Still Of The Night” with Adrian Vandenberg on August 11, 2016: