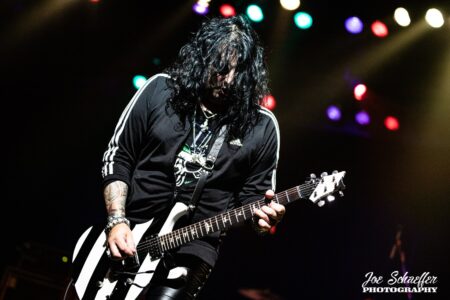 Shute asked about Grossi‘s audition with Guns N’ Roses to which the guitarist stated (as provided by the Chuck Shute Podcast with slight edits): “Yeah, in 2006 when Buckethead had quit, they were on holding auditions in Hollywood and Dizzy [Reed] brought me down as one of the guys to try out and I did audition. I can say I did that. Yeah.”

In terms of whether Guns N’ Roses frontman Axl Rose was there during his audition, Grossi indicated: “No, no, it was the whole band. They were you know, videotaping it. I had to do three songs. And it was, it was pretty surreal to say I was auditioning for because GNR was my favorite band growing up.”

Grossi continued: “Well, they ended up getting…. That was when they got [Ron] ‘Bumblefoot’ [Thal]. Bumblefoot. Okay. Yeah. And honestly, they were looking, they needed, they wanted to replace Buckethead, which is crazy. I’m not the guy for that, you know.”

On whether he was nervous when auditioning, Grossi stated: “Ah, not really, because I’ve been playing on songs my whole life. You know, it’s like, I’d be nervous if he asked me to change your trip, you know, picture transmission. That’s the guy playing nightrain now, no problem. I got that. Okay.”

You can listen to the interview with Alex Grossi on the Chuck Shute Podcast below: