FireHouse guitarist Bill Leverty was recently interviewed by Shannon W for Rockin’ Interviews. The guitarist released his fifth solo album Divided We Fall back on June 19, 2020. While Leverty has been fairly consistent in releasing solo albums since the early 2000s, FireHouse have not released a new studio album with original material since Prime Time in 2003. The band’s eight studio album Full Circle consisted of re-recorded material from previous releases. 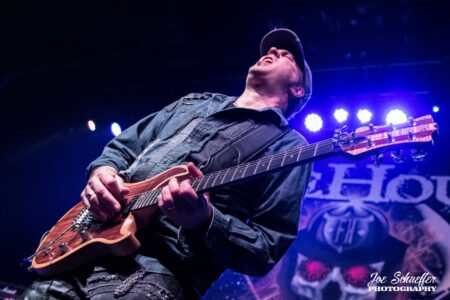 In terms of whether there’s a possibility of a new FireHouse album in the future, Leverty indicated:

“Absolutely, we’ve just gotta get started on it. We do between 55 and 60 shows a year and they’re all fly dates. We get up real early in the morning and we get home real late. It takes us a few days to recover. So doing that over the last 10-15 years, it’s been hard to take time off and get everybody together to write and record and mix and master an album. We plan to do it, but our live schedule is pretty full every year. So that’s what’s been slowing us down as far as getting us in the studio and recording a new album.”

In regard to the response for his latest solo album Divided We Fall, Leverty stated (with slight edits): “I’m extremely happy with how everybody has received it. It was a long time coming, as you said. I wrote the first song for the album six years ago. With the busy touring schedule and other projects I was involved in and family, this wasn’t my top priority. So when I wrote the first song for the album, I released it as a single. Then, when I had a good enough idea to pursue, I finished it and released it. I released most of these songs as singles with videos. Once I got 10 songs, I pressed CDs and released them as an album. The good thing about doing it that way is when you release singles you remind people that you’ve got music out. I’m a little AD/HD also and when I finish a song, I’m dying to put it out there. I can’t stand waiting until I have ten because I never know how long it will be until I have ten. So releasing one song at a time worked really well for me.”

You can read the rest of the interview with Bill Leverty at Rockin’ Interviews‘ Facebook page.