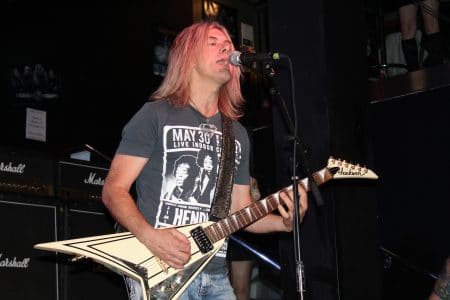 Morris played guitar in Warrant from 2000 to 2004 and played on the covers album Under The Influence (2001). The guitarist appears on country artist Early Ray‘s recently released remake of the Warrant classic “Cherry Pie” which is titled “Apple Pie.”

Towards the end of part one of the interview, Troyan stated (as transcribed by Sleaze Roxx): “I want to say one more thing before we sign off and do the plugs. I want to say that for anyone who questions your integrity about you know, cashing in on Jani‘s [Lane] legacy, it was push comes to shove taking the easy money gig with Warrant or going with your buddy Jani when he left the band, and like, you took that pay cut and went with Jani. You took that risk because you had loyalty to your friend and lost out on money to do that so it’s not just trying to cash in on Jani‘s legacy. When Jani needed you there, you were there for him and you were a true friend. I just want that to be known to all the people out there.”

Morris added: “Absolutely. You’re one of the only people that know that and on of the only people that said that. Yeah, it was… I didn’t even have to decide. It was like, ‘Oh! Jani has quit the band. I’m staying with him.'” Morris continued: “We were writing songs together. He was living in Cleveland [Ohio, USA]. It wasn’t even a thought. It was, ‘I’m staying with Jani. No doubt.’ And you think about it, they got the original line-up together which is what they should have done with the original drummer and the original guitarist.

And had I said, ‘Jani, I’m going to stay with the guys in Warrant, a month later, they would have fired me anyways ’cause they got Joey Allen back in the band, which is the right thing. Why wouldn’t you want the original guy in the band? He’s great! They’re great guys. I always appreciated my time with them. It didn’t end very well because like you said, I made the decision to go with Jani but they did not like that decision so much. But I made the right decision and everyone was happy. They got a career out of it. I got a great career out of it. I always have to say ‘formerly of’ ’cause I am formerly of and a lot of people will say that is biographically correct. There’s many more things to talk about Jani but you’re right, I picked him and i have no regrets. Not one regret.”

You can listen to the interview with Billy Morris by Greg Troyan for the Greg Troyan Show below:

Warrant performing live in Fort Lauderdale, Florida, USA on March 30, 2001 (with Jani Lane and Billy Morris in the line-up):