According to Wikipedia, Cook joined Black ‘N Blue as a rhythm guitarist in 2013 and he switched to lead guitar duties in 2017. 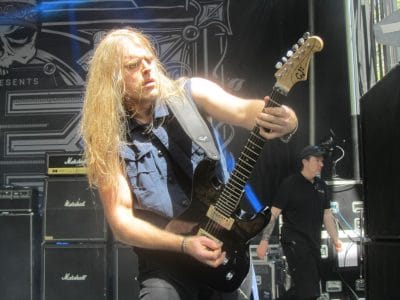 In regard to how he got the gig in Black ‘N Blue, Cook indicated (with slight edits):

“The way that happened was I had met Patrick Young a couple times. My friend Mike Collins, who is a killer drummer in Portland, Oregon, he plays in a band called Metts, Ryan, & Collins and he also plays in Ants in The Kitchen. He came up to me one day and he points at Patrick and says ‘Hey Pat, this is gonna be the guitarist in this project’. It was just a side band, not Black N Blue. I introduced myself to Pat and we got along pretty well. The way it worked out was our guitar player Shawn was, at that time in 2012, thinking about leaving the group. So, he tapped my shoulder about potentially replacing him. Our guitarist, Jeff Woop Warner, left the music scene and he needed to go do his own thing for a while. They tried out somebody else for the position and he didn’t work out and I got a call while I was in the grocery store. Patrick Young was on the line and he asked me if I was interested in playing in Black N Blue. So I walked around the grocery store for 20 minutes getting interviewed about auditioning for the band.

I was playing in two tribute bands that week: a Slayer tribute rehearsal and an Iron Maiden tribute I was also doing. I was teaching guitar lessons and I was also teaching at a Lego engineering school. I was working with really young kids. When Black N Blue called, everything got put on hold because it was a real opportunity. Those guys came and watched me play Iron Maiden and they liked what I did so they called me and told me to learn five Black N Blue songs and come to rehearsal on Wednesday. I had like two or three days to learn four or five Black N Blue songs. I didn’t know which guitar was which because there are two different guitar parts. I just learned as much as I could and they really liked the way I played. They loved my respect toward what their band is. They had a major label record deal in the 80’s with Geffen Records and the original guitarist was Tommy Thayer who now plays with KISS.”

You can read the rest of the interview with Brandon Cook at Rockin’ Interviews‘ Facebook page.