Savatage, Spirits of Fire and Trans-Siberian Orchestra guitarist Chris Caffery was recently interviewed by Andrew Catania for All That Shreds.

In terms of Savatage, Caffery opined: “I would say this about Savatage, the music too, it’s not that he’s not respected, or under-recognized, but it’s a matter that a lot of people have never heard it.  When they do, it’s like Wow! It’s always been that 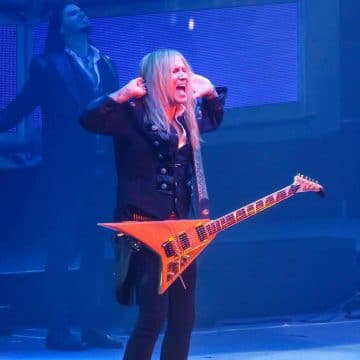 way with Savatage. It’s a band that just, as time goes, we just get bigger. We say to Oliva, when he’s sitting there talking about Savatage touring, he’s like “I don’t know what we would do.” And I say, “Jon, you just don’t get it. It’s like there are decades and people who are just waiting to see this band. Generations of metal fans that would want to see us and older generations that never had a chance to see us.”

I think Savatage has a little bit of time limit that’s a lot longer than people may think. Criss was really special, he was one of those like a Van Halen or a Malmsteen or a Dimebag where, when you heard that record, you knew it was Dimebag or when you heard Van Halen playing, you knew it was Eddie Van Halen. I could hear fifty different guitar players riff through a riff like Malmsteen, but I still knew when it was Malmsteen because he sounds like him. The other guys just sound like “Hey, I can play like Malmsteen.”

When you heard him play, you knew it was Criss Oliva and that was really cool. Regardless of how much people know him, it’s just one of those things where the recognition factor was down low because we just didn’t have that exposure. We didn’t have that chance to get to that exposure. I can only imagine what would happen if he were still alive That’s the way I look at it.”

You can read the rest of the interview with Caffery at All That Shreds.

Wikipedia states the following in part about Savatage (with slight edits): “Savatage is an American heavy metal band founded by the Oliva brothers Jon and Criss in 1979 at Astro Skate in Tarpon Springs, Florida. The band was first called Avatar, and changed their name to Savatage just prior to the release of their debut album Sirens (1983).

Savatage has released eleven studio albums, two live albums, four compilations and three EPs. The band first reached substantial commercial success with its third studio album Fight For The Rock (1986), which peaked at number 158 on the Billboard 200. Their next four albums — Hall of the Mountain King (1987), Gutter Ballet (1989), Streets: A Rock Opera (1991) and Edge of Thorns (1993)—were also successful, but more critically acclaimed than Fight for the Rock. Criss Oliva was killed in a car accident six months after the release of Edge of Thorns, on October 17, 1993. Following his death, Jon (along with producer Paul O’Neill) decided to continue Savatage in memory of his brother. The band released four more studio albums, and went through several line-up changes before going on hiatus in 2002. During the years — partly even before the hiatus — members founded various new bands such as Jon Oliva’s Pain, Trans-Siberian Orchestra, Circle II Circle and Doctor Butcher. On August 2, 2014, Savatage announced that they were reuniting for next year’s Wacken Open Air; although they have discussed the possibility of more shows and new music, the band has not done any live performances since Wacken Open Air in 2015 or released an official statement regarding their future.

One of Savatage´s classics, from the first period of the band – with Jon Oliva on vocals. Find the album on iTunes here: http://itunes.apple.com/de/album/hal…