Cox was asked how she ended up joining The Iron Maidens to which she replied: 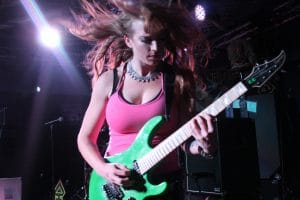 “When I landed in California, I immediately started looking for bands. After a couple of failed attempts finding the right people, I heard through the grapevine that a band called “The Iron Maidens’’ was currently auditioning for their Adrian Smith positionI sent an introduction to their Myspace at the time, and after a few days without a reply, I was upset. What I didn’t know is that I had my messages shut off on my page, so they couldn’t reply! [Laughs].

They found a way to get hold of me to tell me they would love to have me come in for an audition, and the rest is history. I still pinch myself from time to time to make sure it is not a dream, as cheesy as that is. I am extremely fortunate to be in such an incredible and hardworking band, tribute or not. We have seen most of the world together, and we have no plan of slowing down.”

In terms of other projects that she might have outside The Iron Maidens, Cox indicated: “I’m the kind of person who doesn’t care what band I’m in or what type of band I’m in. As long as my heart is full and I’m playing music, I’ll be lending my guitar. I can’t wait to see where the future guides me. Aside from the Maidens, I’ve been working on my first release, and it is very exciting to be on this new journey. All the cell phones I have saved filled with riffs since I started playing are seeing the light of day again! [Laughs]. Other projects during the pandemic I’ve been involved with are jam collaboration videos with musician friends from around the world.”

You can read the rest of the interview with Courtney Cox at Vinyl Writer Music‘s website.