Goldy was asked what the best advice that he ever received from the late great Ronnie James Dio to which he replied:

“Wow, that’s hard. That’s hard to stay, because he poured a lot into me one time. He actually even said “Goldy I want to pass the torch on to you kid”, right in front of his best friend while we were getting ready to go out on tour… And so trying to narrow it down to just one thing I’ll have to answer your question with another question. If you could only pick one, which would you rather do? Inhale, or exhale? Hahaha! I am kidding, but it’s almost impossible to come up with one… 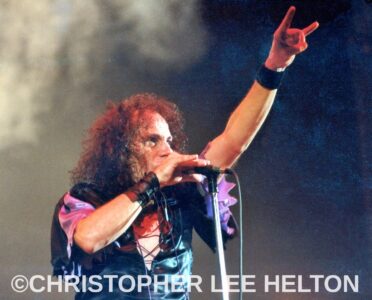 The greatest advice that was kind of molded together is… “No matter what you’re going through, always make sure to be nice to the fans. No matter what’s going on. If you’re having a bad night, no matter what, no matter what happens. Make sure they go home happy”. Also, “always start with a good groove”. Because, he was a bass player, and a lot of guitar players come up with riffs and riffs are great, but –Ritchie knew this too, he knew about grooves when he was in Deep Purple and stuff. And that goes a long way with guitar players, because a lot of times drummers find it difficult to come up with a cool way to play over guitar players’ riffs. Because the riff might be great and it might be the most spectacular thing on the planet. But, if it doesn’t have a good groove, then what’s the point?

And then, also the way he worked was so tedious, but it made all the difference in the world. Because, a lot of people would write songs and they’d be listening to it. And as soon as they get like maybe in the middle of the song they’d go “stop, stop it needs something here!” So, maybe three, three and a half minutes in they stop and they come up with whatever it is that they need and then they move on from there. Then, maybe five minutes “stop!” At the 5-minute mark which now means that only two and a half minutes have gone by it. “It needs something here”. And they come up with something and then they finish it and then they move on. Well, they’ve missed something very, very important….

It’s that the song should tell you what it means, not you! Because, what Ronnie would do is let’s say we’d listen to a song and at around three, three and a half minutes he’d say “stop, it needs something here”… And so we would come up with something that we thought would work, but we didn’t move on. What did we do? We went right back to the very beginning and play it from the beginning and let it go. And if it still felt good at three and a half minutes we keep it. If it didn’t, we’d stop and replace it with something else. And then, what will we do? We go right back to the beginning again and listen. And if it still felt good, then we keep it and then if we had to stop again, we’d do the same thing. He was very tedious, but the way he was he’d let the song tell us what we needed to come up with. Not us tell the song what we think needs to go there. And that may be tedious, but I think that out of all the things that he did that was probably the most beneficial. Because, that’s something that only comes from experience, that you can’t read that in a book. You can’t!

That’s another thing that gets me it’s this new industry standard where people judge you as long as you sound good through that mono speaker on your cell phone. I mean some of the albums that we do we mix a certain way, so you have to have two speakers, or headphones at least to get the full sound. But, nobody… Nobody does that anymore. But, there are a lot of bands out there that they sound fantastic on that little small mono speaker. But what that has done? I see people now who are huge names in the industry, like multi-million, platinum selling artists all over the world, who now mix and master through this tiny little mono speaker. So that way it sounds good on people’s cell phones. Isn’t that fucking ridiculous?

I mean really? The music has become so unimportant to people that the industry standard now is a mono speaker.

And so maybe someday, I’m going to try to maybe pick up somebody special – because I’m getting older, you know, and all the streaming and stuff. It’s like, you know, what’s the point?

So I’m going to try to maybe pick a few people to pour as much information that I’ve learned over the last 30 years and put it into them because maybe by that time, you know, the streaming thing will have come to a close to the point where people would start buying albums  and CDs again, and people will actually be able to make a living being musicians. And by that time I might be dead, but they might have a special advantage over the rest.”

You can read the rest of the interview with Craig Goldy at Rock Pages‘ website.