Sebastian Bach and former Avril Lavigne guitarist Devin Bronson was recently interviewed by Chuck Shute for the Chuck Shute Podcast. Bronson played on Bach‘s last studio album Give ‘Em Hell, which was released back on April 22, 2014. 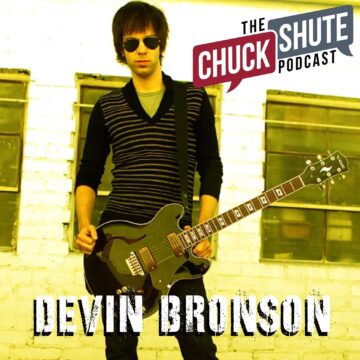 Bronson revealed how he started working with Bach as he stated (as transcribed by Buzz Sprout with slight edits): “Working with him started — that came through Duff McKagan from Guns N’ Roses.” The guitarist added: “I met Duff through a mutual friend that I work with. He was the drummer in Loaded for a while — Duff‘s solo band. So I became friendly with Duff. And he was… Sebastian was working on a record. He had a song from John 5, a song idea from John 5, one or two from Steve Stevens and that was it. And he needed to get a record done. And he was in the studio with Bob Marlette and Duff came into work with them. And I don’t know, I think Duff just was like, “You want to come in and do this with us? Like, I think you might be good to come in and like work on a song. Let’s just go and do a song. I’ll do a song with Sebastian Bach. Hell yeah!”

On whether he was a Sebastian Bach fan, Bronson indicated: “Oh yeah! Oh my God! Yes! ‘Slave To The Grind.’ I remember that record. Like, the opening of that record just hit me in the head. Yeah, I love Sebastian Bach. I’m like, “This is awesome.” And it was like, you know, I want to do a rock record like this. That sounds killer. So we go in, and we write a song [“Harmony” from Give ‘Em Hell] in like, 15 minutes. And it’s great. And then Sebastian goes, “You know, Duff‘s busy doing other stuff. Can you come in again tomorrow?” “Yeah, let’s do it.” So it turned into me doing like nine songs on the album with him where I just came in. We wrote the record. I tracked most of the guitars on the record, tracked a lot of the bass. It was very just like, “Write it. Go record it.”

In terms of future plans with Bach, Bronson revealed: “Sebastian and I currently are trying to finish up some songs for his next record.” Bronson added: “Yeah, yeah, we have some really cool stuff right now. But you know, we’re dealing with Covid and like, trying to do it over Zoom and send files and get, whereas before I can have a guitar in the room and he’s there and he sings something and then we’re all hyped and it happens.”

In regards to guitarist Brent Woods‘ involvement, Bronson stated: “Brent‘s been working on the record, though too. The way the music industry is, [it’s] very much especially like in LA, there are all these people that you see often that are all kind of working. And it’s not uncommon to you know, pop back in and he’s out with this guy now. And this person comes back and you’re working on this. And he’s also… It’s, you know, there’s a camaraderie there. I love Brent. He’s amazing.”

On what we can expect on the new Bach album, Bronson indicated: “The stuff I have done with him. First of all, one of the songs is like seven minutes long, epic, like really massive. Yeah. And then it’s an extension. You know, I think he wants to go. I don’t he pushes it. I mean, he’s like, the heavy metal Steve Perry so there’s a big canvas for him. So I send him like an idea. And then he’ll send me back like a vocal and I go, “Whoa, that’s cool. Like that scream is, that’s what we should do.” It’s still early. I am hoping that we can get in a room because I know that’s when we work really fast like on the last record, or when we were in the room, with Bob being able to say, “That’s great. Track it.””

You can listen to the interview with Devin Bronson on the Chuck Shute Podcast at Buzz Sprout‘s website.