The Dead Daisies lead vocalist / bassist Glenn Hughes and lead guitarist Doug Aldrich were recently interviewed by Jimmy Kay and Alan Dixon for Canada’s The Metal Voice to promote the band’s upcoming studio album Holy Ground, which will be released on January 22, 2021. 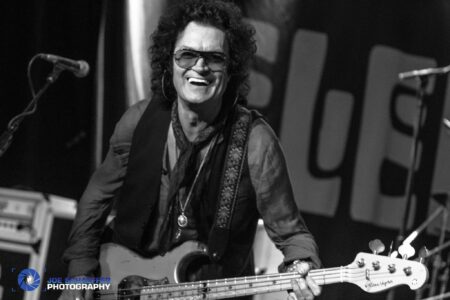 In terms of what it’s like to have Hughes in The Dead Daisies which also includes drummer Deen Castronovo and rhythm guitarist David Lowy, Aldrich indicated (with slight edits): “It’s a brand new day, we are very happy to have Glenn leading this ship. It’s still The Dead Daisies but it’s a brand new start. It’s not so far away from Deep Purple in some ways, that there were different eras of Deep Purple. This is like version four, Mark IV of the Daisies.”

Hughes added: “It’s another chapter in my life, it was a good experience for me to come into this, Doug is an old friend, I love Doug, it’s a great ship we are flying here. We go back 25 years and Doug played in my band about 5 years ago, it was fantastic and back then we talked about doing more work, we didn’t know it was going to be in The Dead Daisies but here we are doing just that.”

In regard to the difference musically in having Hughes on lead vocals rather than John Corabi, Aldrich opined: “We love John [Corabi] and are dear friends but basically it’s a great change because we are not trying to replace John, we are going in a fresh direction. Glenn basically brings a grooviness and heaviness to the band that maybe we didn’t have that before with John when we had a different thing. They are like apples and oranges in terms of musical styles.”

Hughes indicated: “It would have been silly to repeat the same formula. I was brought into this band to change the game if you will and to make it just a different vibe. With the same classic rock movement, the same generational values where classic rock is. I don’t like the word classic rock or any terminology for rock music, it’s just music that we feel is appropriate for this time. The songs were written before pandemic and they speak to a lot of people. For me to join this band was a beautiful moment for me cause I wanted to express myself musically in this band and I was allowed to do that.

So we are pressing forward, we are not looking so far back, we are in the moment, we are pressing all the right groove moments,we are just getting on with life. We spent a lot of time together last November and December. We made the album in France, we lived together and we ate together, we laughed together, we rocked together and it was a great moment. You can hear on the album there is a great blend of musicians all bringing the love to the table and I’m glad we captured ‘Holy Ground‘ in that moment in time before we got hit with this awful virus .”

You can read other excerpts from the interview with Glenn Hughes and Doug Aldrich at The Metal Voice‘s website and/or listen to the interview below: