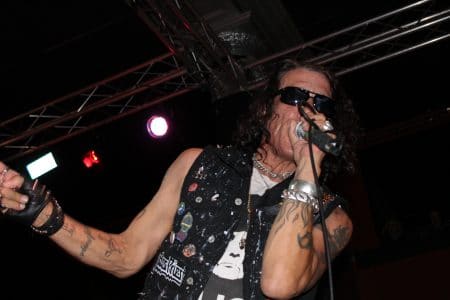 Pearcy has been doing a lot of interviews of late (including with Sleaze Roxx) to promote his fourth solo album Smash and one recurring question is what will be included in the setlist for his solo shows.

All Rock Music & All Music Bands: National & Worldwide recently conducted an interview with Pearcy where the singer was asked if he had anything special planned for his solo shows. Pearcy replied: “We do plan on playing as much music from “Smash“, maybe Arcade, some Ratt hits. We never know. I like to be surprised. [Guitarist] Erik [Ferentinos] writes the set lists for our shows. He’s calls it pretty well. We start the “Smash” dates March 3 and play thru the year. We’re doing a headline tour and good shows. I have a new solo agency called TKO. We ping pong it around the Ratt shows. All good, more the merrier.”

Pearcy was asked whether he had any intentions of playing songs from his previous groups Arcade, Vicious Delite or Vertex to which he replied: “Like the answer above and maybe a Zep, Priest or Aerosmith tune. Hey whatever turns us on you know.” In terms of mixing up the setlist for each show, Pearcy advised: “Depends, this time it’s still up to Erik, he knows us better then we do. He’s the MD.”

Pearcy was also asked about the ongoing legal battle with drummer Bobby Blotzer and the latter’s book where he insults his former bandmates. Pearcy replied by stating: “Well I don’t like putting to much into others negativity. I’m positive. That wins. The legally stuff is dust settled. Tightening the screws. Things are moving in a positive direction for myself, Juan and Warren. We are out and have started to control the name and integrity again. Doing good shows it’s a start. How many fights does one person want to take on at once? Your not going to see the boot in the head fighting dirty. Your ass gets kicked. Not ours.”

You can read the rest of the interview with Pearcy at All Rock Music & All Music Bands: National & Worldwide‘s Facebook page.