Warrant will be releasing their new studio album Louder Harder Faster via Frontiers Music Srl on May 12, 2017.

Guitarist Erik Turner was recently interviewed by Michael McCarthy of Love Is Pop and answered the following about how the group connected with Frontiers Music Srl: “You know, it was quite a while ago when we connected with them. We did a record in 2011 called Rockaholic on Frontiers Records. So, probably around 2010 or 2009 we reached out to them or they 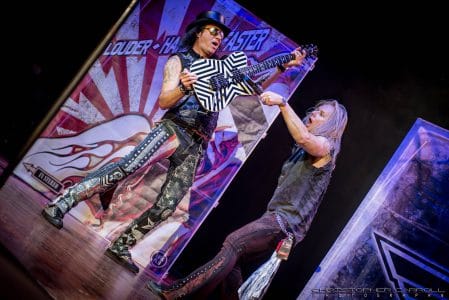 reached out to us. I honestly don’t remember. It was quite a while ago. But the Rockaholic record turned out really good. We had a blast making that record with Keith Olson… And that was our first record with Robert [Mason, vocals] and here we are six years later and we finally got around to doing a new record, Louder Harder Faster, which is a little more ’70’s, hard rock, blues based rock ‘n’ roll in my opinion.”

In terms of whether Warrant were going with a Foreigner, Reo Speedwagon or Night Ranger vibe with their song “Perfect,” Turner stated: “We weren’t necessarily going for that vibe, but that’s how it turned out. On this record more than any other record we’ve done our childhood influences are coming out. I don’t know why. When I was 13, 14, 15 years old, I was listening to Foreigner and Reo Speedwagon, you know, Led Zeppelin, all the hard rock bands from that era. And I think more than any record we’ve done in the past those influences have come out on this record.”

You can read the rest of the interview with Turner at Love Is Pop.

Sleaze Roxx stated the following in its review of Louder Harder Faster including the song “Perfect”: “Perfect” starts off nicely. To be honest, this intro has a Foreigner feel to it. It captures your attention instantly. The slight bending guitar leads are a nice touch. This song is very catchy. As I focus my attention to the verse, I am enjoying the chord changes. Mason’s vocal phrasing fit the part like a glove. The Foreigner like intro appears again minus the bending leads, as it is the basis of the chorus. The band plays it tight and articulately behind, giving Mason plenty of room to breath. A very well crafted piece of music. What I have noticed from this album and the previous release “Rockaholic” is that Warrant are so good at creating the perfect groove. Free and open, yet tight. Never out of place. It really helps the vocal along.