Current Boston and former Sammy Hagar solo band guitarist Gary Pihl was recently interviewed by Ultimate Classic Rock and looked back at the time when Hagar broke the news that he was joining Van Halen.

“He was always optimistic. You know, like, “The next record’s going to be even better.” When I started, actually one of the first things we did was open up the end of Boston’s first tour. We were just an opening act except for a couple of places that we were known — San Francisco for one, and then Sammy’s home territory, San Bernardino, Southern California. Other than that, we were an opening act, because not that many people knew who Sammy Hagar was. But again, every year kept getting better and better. More people would know us and the records sold better and better. Those years were exactly that, it was like, “Wow, we’re playing bigger places and more people know about us. We’re getting more airplay.” As you can imagine, it was a sad day for us when Sammy came to us and said, “Oh guys, I hate to say this, but I got an offer I can’t refuse. The guys from Van Halen need a singer. You know, David Lee Roth has bowed out and they’ve asked me to do it.” And I said, “Boy, I just don’t see anyone could pass that up.” We had such a great band. We felt like we could hold our own with anybody. 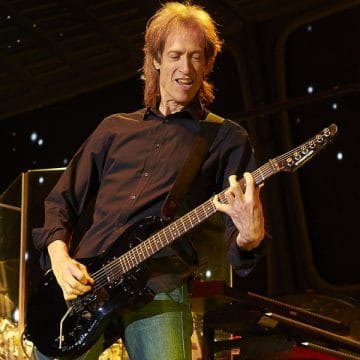 But hey, that’s life sometimes. We were certainly happy for Sammy, that he got such a wonderful opportunity, but of course, disappointed, because we thought we were just moving up every single year.”

In terms of the adjustment of recording in a different manner with Boston, Pihl stated: “I’ve done it both ways over the years. So luckily, it wasn’t brand new for me. But yeah, certainly back in the Sammy Hagar days, we would just all get in the studio and play. We would just play the tracks and Sammy would be singing, at least a work [vocal] track with us. For instance, the last Hagar album I did was VOA, which has “I Can’t Drive 55” on it. We just played the tracks. We would do two or three a day. Usually you’d do overdubs for solos or vocals or those kind of things. That whole album took us 12 days to record. It was practically a live-in-the-studio kind of thing. But over the years, I’ve done other records, both with Sammy and Boston. We didn’t have that luxury to have the whole band at one time, so I had to put my parts on after the fact. Drum tracks are done or at least a rhythm track you can play to, so I’ve certainly been used to that. It wasn’t new for me, so that was good.”

You can read the rest of the interview with Pihl at Ultimate Classic Rock.