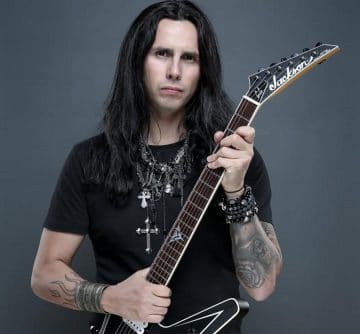 In terms of his thoughts on Osbourne‘s new studio album Ordinary Man, Gus G indicated: “I have to say I like the album. I am happy to see Ozzy recovering and being creative in his downtime. I thought the production was very cool stripped down, back to basics production but still very big and clear. I think there are some really good songs on the record.”

In regard to whether he ever wishes that he had got the chance to write an album with Osbourne, Gus G stated: “I think it would have been nice to write something from scratch with Ozzy, I never got that chance to sit down and properly write  an album with him. But you have to understand Ozzy Osbourne the solo artist is not what it was in the 80’s  where he had a band. Now he writes with different people, tries out different things and I get it. I always take the best out of each situation. I played on one of his studio albums, how cool is that?”

Sleaze Roxx stated the following in its review of Ozzy Osbourne‘s previous album Scream, which featured Gus G: “I’m confused, if you’re bringing in a new guy shouldn’t you let the guy loose and allow him to inject his own style into the songs? Gus G. came in too late to do any writing, but I swear to you that if you didn’t know there’s a new guy in the band you’d think this is a restrained Zakk Wylde playing. I just can’t get my mind around why Gus wasn’t allowed to make his mark on Scream. If you want Zakk lite wouldn’t it make sense to keep him around? The verdict is that Scream isn’t a landmark album. It falls somewhere between Down To Earth and Black Rain in the Ozzy Osbourne catalogue.”