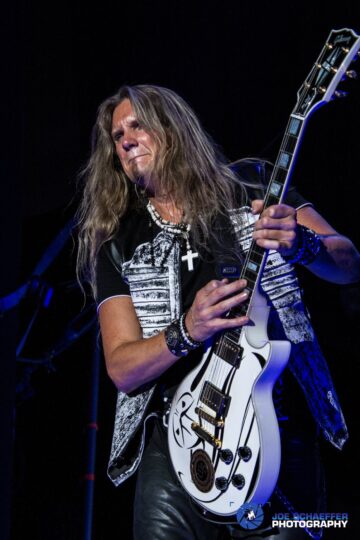 In terms of whether he has received any word on when things might stir in the Whitesnake camp, Hoekstra indicated (with slight edits): “No, I haven’t really heard any plans from David [Coverdale]. I think he’s expressed a desire to be able to get back out there again on the road but nothing specific at the moment. We’re just there for him whenever he needs us.”

With respect to what he has been up to beside the album Running Games, Hoekstra stated: “Well, I’m super, super busy man. Since the Covid hit, I’ve finished up the tracks for this record, I put out the EchoBats project with Tony Harnell the song ‘Save Me From Loving You’, I’ve put out quarantine videos, I covered ‘Jane’ (The Jefferson Starship classic) with Mike Portnoy and Dino Jelusick, and ‘Stormbringer’ with Dino Jelusick and Virgil Donati, I was on Jen Majura’s Jam with Nico McBrain. Let’s see, gosh, I’ve been on two compilations, and playing on other people’s stuff, I would say three or four sessions a week. Then teaching thirty lessons a week, doing Masterclasses for Rock and Roll Fantasy Camp, doing cameos and personalised messages for people – I would say 10-215 a week, so I’m just constantly going.

I just turned in the songs to Michael Sweet for his project with Nathan James that I signed up to do. And also co-writing a little bit with my friend Jim Peterick for an album he’s producing right now. So it never ends, I mean I’ve been writing and doing sessions and lessons and writing, I’m slammed every day right now, not to mention that I’m a Dad and have two small kids at home! So I wear the Dad hat a good percentage of the day as well!”

You can read the rest of the interview with Joel Hoekstra at The Rockpit‘s website.