Current Rob Zombie and former David Lee Roth guitarist John 5 was recently interviewed by Sleaze Roxx writer Ruben Mosqueda for Metal Titans and was asked whether there is any movement towards that album seeing the light of day. 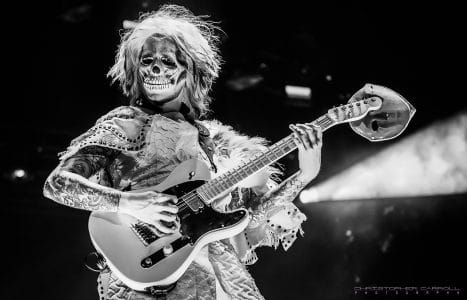 John 5 replied: “[long pause] I think it will see the light of day, I’m banking on it, because it’s such a great record. I can’t say for sure, but I think Dave is working with Van Halen right now, which is wonderful. I’m happy for him, that’s one of my favorite bands! I think it will come out when Dave is ready to release it. I think you’ll love it, it’s a wonderful record! I’m so proud of the album.”

In terms of the release date for the next Rob Zombie album that is apparently already done, John 5 advised: “I have no idea, but we just had a rehearsal yesterday. We’re all such great friends, when we get together we rehearse! [laughs] Even though I’m leaving on Monday to start my tour I just really love those guys. I can’t tell you how much fun it is get together with the guys, we laugh and we jam.  So, to answer your question, as of right now, there’s no release date, but I’m so excited for you guys to hear it!”

You can read the rest of the interview with John 5 at Metal Titans’ website.

Wikipedia states the following about John 5‘s time with Roth (with slight edits):

Regarding how he came to meet Roth, in Guitarist Magazine, Lowery relates that, “when I was little, my dream was to play with David Lee Roth. One day I was sitting at my friend’s house and… I wonder[ed] what… Roth is doing now. [In 1997, Roth had just been let go from Van Halen for a second time in favor of Gary Cherone, and also penned a tongue-in-cheek memoir.]. I’m gonna call up his manager and see if he needs any songs.”

John 5 submitted six tracks that he had written to Roth‘s management. Having been a longtime fan of David Lee Roth‘s work, both in Van Halen and as a solo artist, Lowery believed that he knew exactly what Roth would like. On hearing Lowery‘s songs, Roth was very impressed and subsequently asked for Lowery to submit several more songs. At the time, Roth was choosing between Lowery and Mike Hartman as to who would play lead guitar. (Hartman would also play bass on the album under the moniker, “B’urbon Bob“.) Tragically, Hartman would die a short time later.

Impressed by John 5‘s prodigious skill, Roth scheduled a meeting and then scheduled a recording session that lasted two weeks and resulted in the fourteen track DLR Band album. “I remember before we started, he [David Lee Roth] said, ‘If you can’t do it in two takes, you can’t do it.'”

In 2003, while still lead guitarist for Marilyn Manson, Lowery (then called John 5) was invited by David Lee Roth to write and record the single non-cover song for Roth‘s 2003 album Diamond Dave.

In 2014, John 5 announced a new album with David Lee Roth, which he hoped would come out in the future.”