It was noted that Levin has been in Dokken for almost 20 years. Levin has played on the following Dokken studio albums: Hell To Pay (2004), Lightning Strikes Again (2008) and Broken Bones (2012). In terms of his proudest moment to date as lead guitarist in Dokken, Levin indicated: 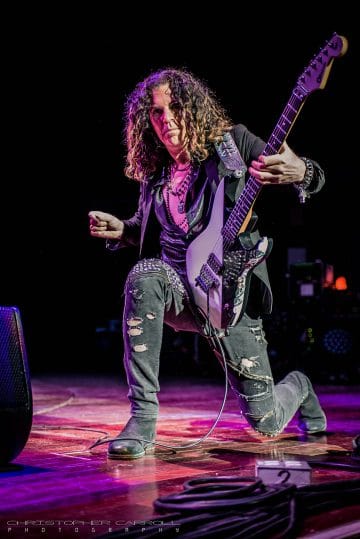 “Well I’m very proud of all those recordings we did. Certainly I love the Lightning Strikes Again record and I think the Broken Bones record was my favorite. I spent a lot of time on the solos on that record. In the past at that up to that point I would usually just take one or two passes and pick the one I would like best, and then just do some “punching in” from there. But on the Broken Bones album instead, I set it up so that I could just record over and over on a track as much as I wanted to and I would do that over the course of weeks, and then when I go back and edit it.  It was really interesting to see how different my approaches would be from a day-to-day basis or others like I’m through a whole set of them on one day, then two weeks later without listening to what I would do a whole bunch more. Then I was able to pick you know of what I felt was the best vibe for that particular song so that really worked well. So I could really think that the Broken Bones was my proudest moment in terms of the guitar soloing.”

With respect to Levin‘s musical training growing up in New York before he got his big break playing in Doro, the guitarist stated:

“My early musical training in New York I was in a club band called Devious and I dropped out of college after two years of attending. This was in 1986 and I joined a Long Island club band and it’s amazing how everything in life is a stepping stone because after a couple years of doing that, a friend of mine, Tommy Henriksen, who still a dear friend of mine today, saw me play at a club and he was in a band called Warlock. Then when they started the Doro Pesch project when they needed a guitar player he called me and got together with him a few times, rehearsed went down to SIR, auditioned then I ended up getting that and that was a great experience me because all of my other musical experience experiences were as a result of that, in other words everything was as a step in the chain and sure enough ended up playing on the Force Majeure record which was a great experience and at 23 years old I got to do a headlining tour of Europe and it was just a wonderful experience there!”