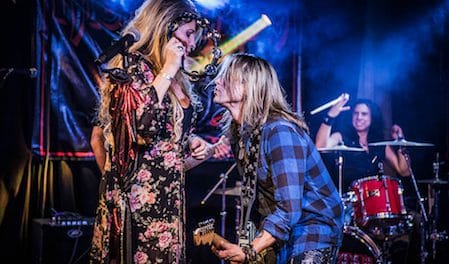 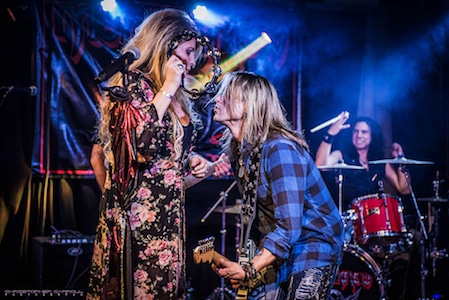 The duo was asked about the decision to not choose a band name and go by Janet Gardner‘s name. Gardner replied: “Good question! When we first started talking about doing this, we threw around the idea if this was a band or should we be a duo. After much deliberation we decided that we’d go with Janet Gardner because I have somewhat of an established fanbase. I think even if some people might not know Janet Gardner they’re familiar with Vixen and they’ll be like “Oh, that’s the singer from Vixen, I know who that is”.” James added: “Janet busted her ass for years [with Vixen] and we never did anything outside of that. I feel that she deserves the accolades for this.”

In terms of having to check his ego at the door, James opined: “Yeah, you know I’m part of this, we’re a team and that is good for me. I know there are people that say “Oh, what is he doing on the album covers?!” We just brush some of that kind of stuff off. There are times when we respond back hoping to clarify that it’s the two of us that write, record and perform on the album. I can understand the confusion that people have, but I hope that explains to them what my role is in this. I’m just a lucky guy that gets to do something he loves with Janet. I love my supporting role in this.”

Gardner added: “I sometimes answer some of the fan questions on social media regarding Justin’s role in this. There have been partnerships like this before. The one that people would be most familiar with are that of Pat Benatar and Neil Giraldo, they are billed under her name and they’ve done fine. I love that Pat gives him a lot of credit for his role in what they’ve done on all of those classic records. Now, people know them as Pat Benatar and Neil Giraldo, that’s just great!”

You can read the rest of the interview with Janet Gardner and Justin James at KNAC‘s website.