James spoke about some of the major artist auditions that he did back in the day as he stated (with slight edits): 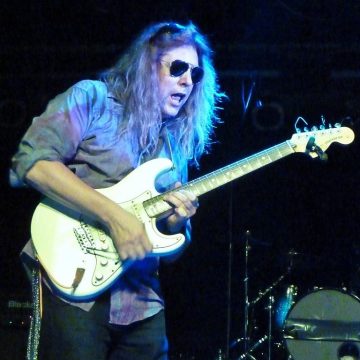 “Three audition situations that come to mind around that time are (1) the Stryper audition, (2) Black Sheep and (3) Driver.  Very shortly after Steeler disbanded, I received a call from the members of the Christian band, Stryper.  They told me they were replacing their lead guitarist and asked me if I would like to join the band. I agreed that it sounded like a good idea and started practicing and working very closely with Michael and Robert Sweet. Robert striped up a couple of my guitars and I believe their mother made me a striped outfit. We worked on the songs from their record The Yellow And Black Attack and most of the material from the album which was to become known as Soldiers Under Command. Things were proceeding nicely until we got to the point of tightening up the vocals. It was then that we realized I could not hit the high harmonies and play at the same time. Quite a humbling experience! I suggested that they should ask their original guitarist, Oz Fox, to rejoin the group as he was a much better singer than I was.

Black Sheep was an L.A. band that had Slash and Paul Gilbert as lead guitarist. Paul suggested to me that I might want to take over the spot he was leaving vacant as he was then concentrating his efforts on his new band Racer X. I ended up joining the band doing quite a few live shows and playing on the record along with Paul and the great drummer of the band, Todd DeVito. I got a call from a drummer friend of mine, Eric Singer, recommending that I call Rudy Sarzo who at that time was forming a new band with drummer Tommy Aldridge. They had been auditioning guitarists for some time at that point, so after we jammed a few songs, Rudy exclaimed that I “was like a breath of fresh air” and was asked to join the band on the spot. We immediately started working on material and auditioning vocalists. At one point, we were invited by David Coverdale to join his band Whitesnake (which Rudy and Tommy did eventually join) but we decided to pursue our vision of a brand new band. We enlisted the talented Jeff Scott Soto on vocals and keyboards, that band became known as Driver. We recorded some demos and were featured in the Japanese magazine, Hard Rocks.”

In terms of his time in Steeler, James indicated: “I had to master all the Steeler material in a very short amount of time. Four days to be exact. I had auditioned for the band on a Sunday afternoon and we played our first gig the following Thursday, headlining a sold out show at the Country Club in Reseda. As far as cassette rewinding, my chops were basically already developed as I had been playing in local fusion bands covering material by Allan Holdsworth, Al DiMeola and Mahavishnu John McLaughlin. There were a few classical concepts that Yngwie [Malmsteen] utilized that were fairly new to me at the time, such as the diminished arpeggio sequence in “Hot On Your Heels” but it only took me a couple of hours to figure them out and have them flowing under my fingers. It was a great learning experience.”

You can read the rest of the interview with Kurt James by Thomas Amoriello Jr. at Boston Rock Radio‘s website.