Former Bang Tango guitarist Mark Knight was interviewed by Hall Laurel for the book Soundtrack of Our Youth: History of Hair Metal Music, which was released in September 2018 and is available in Kindle and paperback formats. 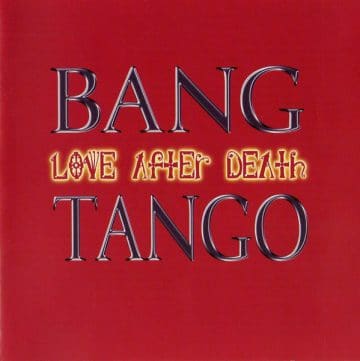 With respect to Knight‘s favorite Bang Tango album, the guitarist opined: “I personally think Love After Death was our best record and better than the first two studio albums. We were really fine tuning our sound and getting it where we wanted to be with Love After Death.”

Wikipedia states the following about Love After Death (with slight edits): “In 1993, after Dancin’ On Coals proved to be not the success MCA had hoped for, the band’s label still honored Bang Tango‘s record contract with a third LP. Hoping to recapture the success of their first album, the band decided to re-team with Psycho Cafe’s producer Howard Benson for Love After Death. The album ended up being shelved by MCA due to the label feeling a return would not be possible with how much was already invested monetarily for the recording. After recording was complete, guitarist Kyle Stevens made the decision to leave the band. The album would see a release in the UK and Japan through the Music For Nations label. Although to this day, the band still perform songs from this album during their live set, Love After Death has yet to see a release in the U.S.”

In terms of how the European crowds react to the songs from the album, Knight advised in his interview contained in the book Soundtrack of Our Youth: History of Hair Metal Music: “The band was in turmoil during the “Love After Death” tour in Europe so I feel like the audiences didn’t really get their money’s worth. Joe Leste decided that we should play a bunch of covers and we didn’t play much from the record. I recall a crowd in Scotland being very disappointed with us. It sucked because we loved Love After Death and wanted to work it, but the band was already starting to fall apart and we just had to get through the tour.”

In regard to MCA Records not releasing the album and the band breaking up shortly after, Knight stated: “I think we could have crossed over into the grunge era. We really liked what was happening in Seattle, musically, at the time and our sound was moving in that same direction with Love After Death. You know, as far as the label, things were changing at MCA at the time. We spent a good amount of money and time making Love After Death. I think maybe MCA thought they invested more money in us then they could get recoup, and it would have cost more money to promote. I think they should have just released it since it was already done, but they did let us have the record to shop to other labels. We spent two years doing that. Music for Nations picked it up in Europe finally. We toured Europe for a couple of weeks and then when we got back, we just kind of disbanded. It was gradual, not just an abrupt break up.”