When Schenker was asked whether he was approached during his early days of the Michael Schenker Group to join Ozzy Osbourne‘s solo band, the guitarist replied (with slight edits): “Ozzy Osbourne was definitely not too happy with me having to 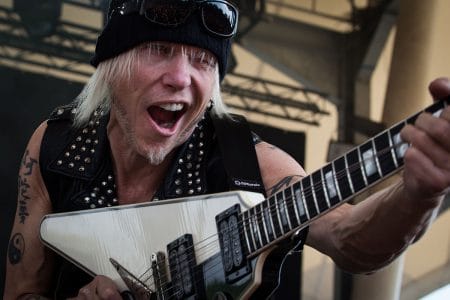 experiment with my vision, because I wouldn’t have made him any money. The thing was, Cozy Powell [drummer] said; “Michael, you can’t join Ozzy Osbourne. We are in the middle of doing ‘Assault Attack’”, and I was tempted to do it, but then I had to remember my time with the Scorpions and with UFO, and I said to myself; “If I join Ozzy Osbourne, then I never needed to leave UFO in the first place, because it would be just more of the same thing”. For me, I had reached my peak with ‘Strangers In The Night’, and for that was it.”

Schenker lated added during the interview: “If I had of joined Ozzy, maybe I wouldn’t still be alive, and secondly, I would maybe have gotten a lot of money, but would not have taken care of myself, so I went the right way, and it was all meant to be this way. But now I can make up for what I couldn’t hold for the ‘80s; I dress like an ‘80s rock star now, I drive a sports car, and I celebrate! So, I’m making up; I took care of the necessity first; I build my house on a rock, a good solid thing. There is a saying; if you stay true to yourself, then everything else will be added onto you and more, and that’s exactly what’s happening.”

You can read the rest of the interview with Michael Schenker at eonmusic‘s website.

“After returning to the UK from Japan in August 1981, having recorded the live album One Night At Budokan, Schenker and his band played a short tour of the UK. After the tour, Cozy Powell and Peter Mensch (Michael Schenker Group‘s manager) wanted a better singer for the band and suggested David Coverdale, but Schenker himself wanted Graham Bonnet. After some disagreements, which ultimately led to the termination of the cooperation between Mensch and MSG, Bonnet joined the MSG in February 1982. Meanwhile, Powell and Paul Raymond left the band for their own reasons and were replaced by drummer Ted McKenna and session keyboardist Tommy Eyre. After four months, the band went to France to start recording the album that would become Assault Attack with producer Martin Birch, who arrived fresh from Iron Maiden‘s album The Number of The Beast. The sessions took place at a French castle, Le Château d’Hérouville. This was the last time until the Tales of Rock’n’Roll album that Schenker and Bonnet cooperated.”