After an almost ten year absence, guitarist Mike Stone is back in the Queensrÿche line-up filling in for Parker Lundgren while the latter takes care of some “personal things.” No further details were provided by the band with respect to Lundgren‘s departure as the following statement on the group’s Facebook page on August 30, 2018 attests to: 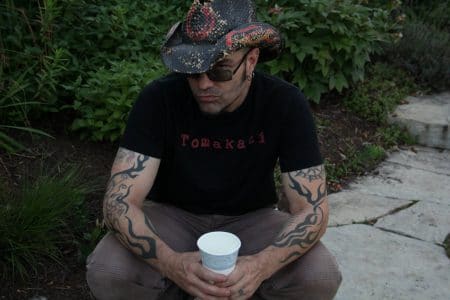 “We want to let everyone know that Parker Lundgren has some personal things to take care of, and thus will not be with us on the Scorps run, but will be returning to us all at the end of September. Additionally, we’d like to thank Mike Stone for filling in while Parker is away. #Queensryche #announcement #temporaryuntilSeptember#MikeStone”

Wikipedia states the following about Stone‘s departure from Queensrÿche in 2009 (with slight edits): “On February 3, 2009, Stone announced the end of his association with Queensrÿche to focus on his side-project Speed-X, although court declarations (Michael Wilton in particular) later revealed Geoff and Susan Tate fired him without discussing it with the other band members: ‘After this tour, I received a phone call from our guitarist, Mike Stone letting me know he was being fired from the band. I had no knowledge of this or that we were even considering letting him go. I immediately called Geoff Tate and Susan Tate and requested a band meeting. It was at this meeting that we were told that Mike Stone was being replaced by Miranda Tate’s (Geoff Tate’s daughter) new boyfriend, Parker Lundgren. They said that Mike Stone was making too many grand demands and we could hire Parker Lundgren for cheap. We would be making more money. I had never heard Parker Lundgren play, nor was I or the rest of the band included in this major decision. Again, there was division in the band as our voice on most band decisions was being stifled.'”

Queensryche – Eyes of a Stranger (FivePoint Amphitheater in Irvine, CA 9/2/2018)