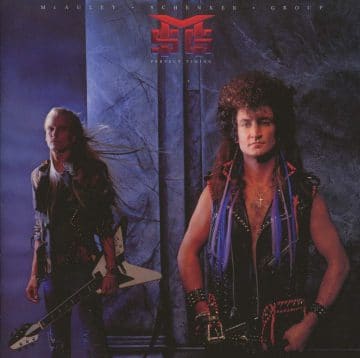 Perry recalled how he ended up playing on MSG’s Perfect Timing album, which was released back in 1987. Perry indicated (as transcribed by Non-Stop Rock Talk with Tyson Briden with slight edits):

“This is a funny story how this ended up happening. I had been managed by Leber & Crebs at the time and so was Michael Schenker. The band that I was in, Heaven, had folded and I was out in L.A. and I was about to — I’d been rehearsing. I’d done a couple of rehearsals with Pete Way in Waysted and I was hanging out with his drummer Johnny Dee at the Oakwoods. We’re at the swimming pool while I’m swimming and it just so happens that Michael and Robin McAuley came to stay at the Oakwoods at the exact same time. Michael knew me from being in Heaven and he knew I played keyboards because I had added keyboards to “Knockin’ On Heavens Door” and he was in the studio at the Record Plant while we did that.

So he came over to me and he asked if I wanted to — he mentioned they were looking for a guitar player / keyboard player. [He] asked if I’d like to do it. I said, “That’d be fun but I don’t want to play rhythm all night” and he went, “Well, you do all the tapping stuff, over the necks, wacky tapping!” And he air guitars that. He says, “You do all this and I don’t and I think people want that nowadays!” He says, “If you play that way and don’t sound like I do, you know, maybe this could work! You want to try something on this album?” I go, “Sure.” He goes, “What are you doing right now?” I go, “Swimming!” He goes, “Do you have a guitar here?” I said, “It’s right upstairs!” I literally got out of the pool, [and] got the guitar.

We went to the studio and we walked in, Robin’s there and Andy Johns is there and Schroeder is there who is the manager from Germany. He managed Michael and he managed the Scorpions. Krebs managed them in America. Anyways, those three guys are sitting there and none of them know me. Michael and I walk in and Micheal says, “Hi everybody, this is Mitchell and he’s going to try the guitar solo on “Gimme Your Love”.” They all look at him like he’s crazy and pull him into another room and just disappear for about a half hour. I’m like, “Oh well, that was nice while it lasted!” But they came out and I ended up doing the solo and the rest is history!”

You can to the interview with Mitch Perry by Tyson Briden for the Non-Stop Rock Talk with Tyson Briden podcast on Buzz Sprout’s website.

Timeless. This is a true rocker. Once again, brought to you by Froman. Hey Robin, good luck with Survivor.