Queensrÿche have lost one of their long-time band members as guitarist Parker Lundgren has elected to step down from his duties with the band after a 13-year run to focus on his various business ventures. 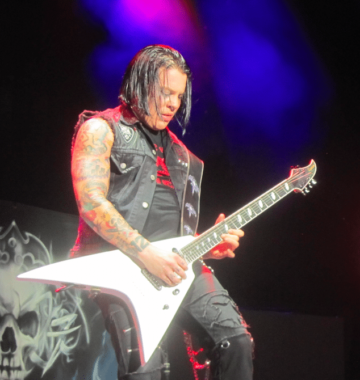 Parker Lundgren, guitarist for Queensryche, has recently decided to step down to pursue other business ventures, which he has become very invested in over the past couple of years. For over a decade it has been a great pleasure watching him evolve and flourish as a guitarist, song writer, and most importantly, a wonderful human being.

Parker will always be family to us and we wish him all the success in the world with his new endeavors.

For several years I have been deeply immersed in collecting and selling guitars, as well as rare and fascinating musical instruments. This passion led to the opening of my guitar store “Diablo Guitars” in 2019. Since then my business has grown and I recently acquired a storefront with a full service repair shop. In 2020 my wife and I opened “Lucky Devil Latte”, which has quickly expanded to multiple locations. With these new endeavors and ensuing responsibilities, my time to devote to Queensryche has become increasingly strained and I no longer am able to commit the time and focus it deserves.

For these reasons I have made the difficult decision to step down from my role as guitarist in Queensryche. I want to thank my friends, family, and fans for making the past 13 years an amazing journey. I wish nothing but the best for my fellow band members, crew and everyone who has supported us. I hope to have your continued support as I pursue new ventures.”

Wikipedia states the following in part about Lundgren‘s start with Queensrÿche (with slight edits):

“A falling out between Queensrÿche and their then-guitarist Mike Stone opened up the position of guitarist in Queensrÿche. Lundgren became Stone‘s replacement, aided by the fact that he already knew most of their material. Lundgren was tipped that the upcoming tour would consist of the albums American Soldier, Rage For Order and Empire, which he learned before auditioning with Queensrÿche‘s lead guitarist, Michael Wilton. Wilton was surprised that Lundgren knew the whole set, and possibly also relieved he would not have to teach the new guitarist all the parts.

Because of his new appointment with Queensrÿche, Lundgren left Sledgeback in February 2009. On July 18, he married Miranda Tate, but they divorced about six months later. In concert, Lundgren plays the original guitar solos by Wilton and original lead guitarist Chris DeGarmo note for note. It was suggested he do so by Wilton, because Kelly Gray and Stone (his predecessors replacing DeGarmo) had their own solos, to the fans’ displeasure.”

Queensrÿche‘s “Get Started” video (from Dedicated To Chaos album):