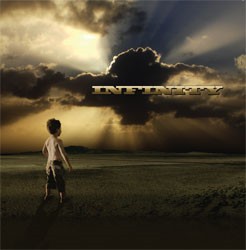 Melodic Rock Records are gearing up for the July 11th release of Infinity’s self-titled album. Sound samples and pre-order information can be found at www.melodicrock.com.

Infinity is a monster project that was recorded back in 1986/87 featuring AOR star vocalist Mitch Malloy and Red Dawn/Rainbow/Billy Joel keyboardist David Rosenthal. For one of the many reasons seen in the music industry, the record was never released at the time, but after 20 plus years it will finally see the light of day. The nine tracks that make up this lost classic are nothing short of blinding keyboard driven 80s melodic hard rock, with vocals that need to be heard to be believed! The rest of the line-up consists of various session guys, including one very young Reb Beach (Whitesnake, Winger).

What’s special about this release is the fact that the ninth track didn’t really exist until last month. The song Liar was never completed back in 1986, but the song was recently resurrected from the original tape it was recorded on, repaired enough to become a true backing track, with Mitch Malloy adding a brand new lead vocal and drum track from his studio in Nashville.

Mitch Malloy comments: “Infinity was basically me and Dave and we used different guys to play on the tracks. It was 1986-87. I was a kid. So was Dave. I was singing in clubs in Jersey and making a name for myself and looking for a real band and he was looking for a singer. Rainbow had just broken up and he was wanting to be in his own band. I was sick of playing the clubs and looking to step up and it worked out. We had some fun and wrote some songs and never got signed so we both moved on to different things. It’s exciting for us that this 22 year old music is finally going to be heard. We worked hard on it and were very proud of it. And for how old I was and for the time I am still very proud of it. It’s really my first real recording sessions ever. Dave and I had a lot of laughs and a lot of fun and we worked very hard to make out music as good as we could possibly make it. And I think it shows.”

Infinity will finally see the light of day in October. All of the tracks are exclusive to this release and have never been released before.