Return of The Comet and former Frehley’s Comet guitarist Richie Scarlet was recently interviewed by Kenny Kessel for Canada’s The Metal Voice. Return of The Comet consisting of former Frehley’s Comet and Ace Frehley band members — bassist John Regan, lead vocalist / guitarist Tod Howarth, guitarist Richie Scarlet and drummer Steve “Budgie” Warner —played a handful of shows in the Northeastern portion of the United States of America between April to June 2019. Apparently one of the shows was recorded and a live album might be in the works.

Scarlet stated the following to The Metal Voice: “I don’t know much about it but I do know we recorded a live show in Sellersville, Pennsylvania at the Sellersville Theater [on April 9, 2019] a year ago or so. I am a little bit in 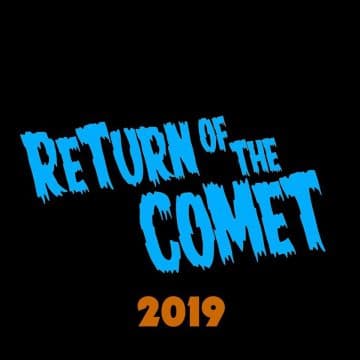 the dark about this but there is word that it is coming out. I actually haven’t heard it yet but if John Regan thinks it’s good enough to put out that’s good enough for me. We were kind of hitting our stride when this Covid thing happened. We had some cruises lined up, so hopefully I will know more about this record in the near future.”

Video footage of Return of The Comet performing live at Foxboro, Massachusetts, USA on April 12, 2019:

You can read other excerpts of the interview with Richie Scarlet at The Metal Voice‘s website and/or listen to the interview below: