Sleaze Roxx passes along its condolences to long-time Ace Frehley solo band guitarist Richie Scarlet and his family as Scarlet‘s wife Joann of 25 years has recently passed away. 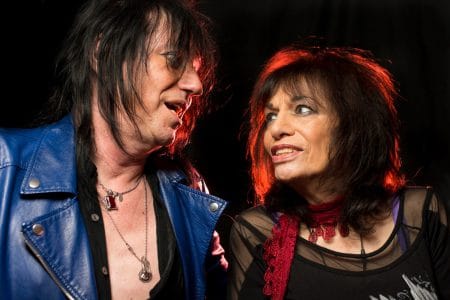 The following message was posted on Scarlet‘s Facebook page on October 12, 2018:

“I write this with the heaviest heart I have ever had. I’m here to announce that my wife, Joann, of 25 years has passed away at 12:10 am. She has been battling the dreadful disease ALS also known as Lou Gehrig Disease. As people know she was an incredible woman who was full of joy and great spirit. We had an incredible life together. I’d like to thank every one who sent out there prayers for Joann and myself. I really appreciate it. Life now without her will never be the same. She was one in a million and will be beyond missed.”

Back on October 1, 2018, the following message was posted on Scarlet‘s Facebook page:

“Here is only a handful of photos of people who touched Joann‘s heart and without question she touched all of there’s in so many ways. Joann is a tough Italian woman from the Bronx who will fight this dreadful disease ALS to the very end. Thank you for all of the prayers that were sent to her.”