Jack Russell’s Great White guitarist Robby Lochner was recently interviewed by All Rock Music & All Music Bands: National & Worldwide and asked how he ended up joining the band. 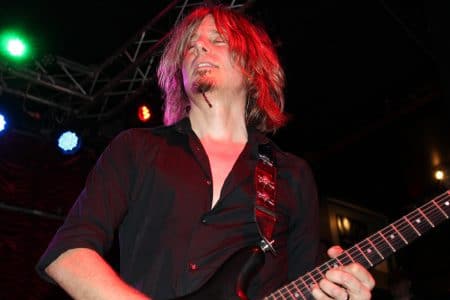 Lochner stated: “I was playing a NAMM show performance with an act I work with called “DigJelly” in January of 2011. My friend Dario Seixas came out and brought former Great White Drummer Derrick Pontier. I invited them up to jam and we ended up playing about 40 minutes of music as a 3 piece. It felt real natural and went over really well. Shortly after that Derrick brought Dario and I over to meet Jack about potentially putting a band together. I did go back twice to hang out with Jack but he was in the early stages of recouping from some major surgeries and was a mess and I saw it going nowhere. After that I thought nothing of it until 9 months later Dario who had kept in touch with Jack called me up to come see Jack again. At that point, Jack was living in Redondo Beach and doing much better. When I walked in Jack says, “I kind of remember you!” I’m thinking, “Yeah right, he doesn’t remember me at all!” That evening Jack decided he was firing his old band and starting his own version of Great White and asked if I wanted to join. I was reluctant and skeptical but said yes. That was on a Saturday and come Monday people are sending me web links stating that I was in the band and they even spelled my name right! So, I’m thinking, “I guess I’m doing this”.”

In terms of previously working with the “Metal God” Rob Halford in his post-Judas Priest band Fight back in the early ’90s, Lochner stated: “Rob is such a pro! It was my first national experience and to see it being done by the best is something I’ll always be grateful for! Talk about baddass! So F-ing great every night…that is why he is the “Metal God!””

Lochner also had some wise tips for aspiring musicians when he stated: “No matter what someone’s passion is, follow it! Be it music, sports, construction, cars or whatever. Everyone has gifts, it’s about developing those gifts and following your dreams. Don’t let critics, naysayers, trolls or your own inner critic detract you! In music, it’s not a foot race or a game where the most points win. You need to be able to step back, see what you’re doing objectively and figure how to improve it! Don’t worry about how anyone else does anything. Find what makes you unique and follow it! You might have to work in other areas while you create the avenue to make a living in your field. I’ve always made a living in music whether it’s teaching, producing, writing playing, performing but, when I first moved to southern California I took odd jobs here and there to make ends meet. You do what you have to do and keep you focus!”

You can read the rest of the interview on All Rock Music & All Music Bands: National & Worldwide‘s Facebook page.