In a rather unconventional way to look for a new guitarist gig, former Black ‘N Blue guitarist Shawn Sonnenschein has posted the following message (perhaps humorously) on his Facebook account yesterday: 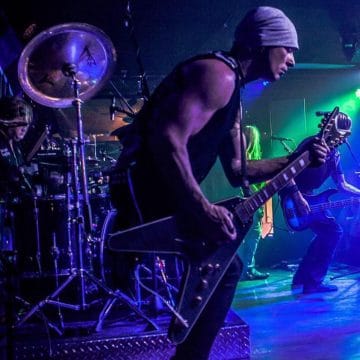 “Can I get a New gig? Anyone? White snake? Judas Priest?
AC/DC?? Ozzy?
Rick Springfield ??
I gotta eat too you know!”

Back in March 2017, Sleaze Roxx interviewed Sonnenschein and asked him why he was no longer in Black ‘N Blue to which he replied:

“That’s a good question! I honestly do not know…. I really don’t. After the last California cruise [Monsters Of Rock Cruise West from October 1 to 5, 2016], which was kind of a rough one, we came back. I got a phone call from Jaime [St. James]. He told me that I was fired. I was out of the band. I wasn’t going to ruin all the work that he’d done over the years with his position and Larry [Morand] and the Monsters Of Rock franchise, and he hung up on me. I had no idea. I know that we had a rough go on that one. I got seasick on one of the shows. Really, the boat was hopping around quite a bit and I had a rough show. I mean I’ve seen videos of it, fine, but I was about ready to puke the whole time [laughs] that I was onstage. It was all over the place. It was terrible but I loved playing the shows and I loved being on the boat.

I brought my girlfriend, my new girlfriend, on that one. You know, there was a little bit of a stir about her. We pulled through. We decided that you know, we would just stick to ourselves and have our own fun. She wasn’t being treated very well on the boat so we kind of escaped away from everybody and kind of did our own thing. We bought some masks. It was close to Halloween. We ran around in masks and had a blast. She jumped on stage with Loudness. I’ve known those guys for a long time ago. In her bikini — it didn’t disrupt the show. She did it between songs. She just wanted to give you know, the lead guitarist a hug. She just thought that he was really amazing. I said, “Go do it!” So she just jumped up there and gave him a hug. The crowd loved it. She went to go off stage and the singer was screaming at her, “What about me? What about me?” So she climbed back on stage and went out of her way to give everybody a big hug. She jumped off stage and you could hear the singer saying, “That’s why we love America right there.”… 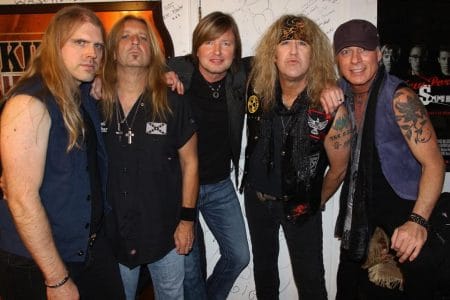 clothes in the pool and a member of the Black ‘N Blue entourage actually smacked her on the ass. She was being treated really disrespectfully. We decided that we were going to try to separate ourselves from everybody so she would have a good time. I told her when I invited her to come that being part of the Black ‘N Blue camp was the most amazing thing in the world and she was going to be accepted and loved and taken care of. Boy, it was kind of the opposite so I was king of embarrassed about that.

We were chased around by security at one point that were yelling at us about getting caught on stage with Loudness. We didn’t see anything wrong with that. In the rock n’ roll industry, I just found it very bizarre that anybody would be accusing just a beautiful innocent loving person of anything at all. It was just very very crazy. So we went throughout that you know. We missed our flight actually getting to the boat. We could have waited around for another flight and that would have been free but she actually ponied up the money for fresh flights to get us there so that there was no stress. She just went out of her way and at one point, we went for sushi with my buddy Kevin, the guitar tech for some of the biggest bands in the world — a really good friend of mine — techs for me for free just to help out because I was having some trouble. Just the greatest guy ever and we bought him some sushi and our card was turned down. They were getting really pushy about it. I said, “Look, we’ve got plenty of money on our cards. No problem. Send it to our room and we’ll figure it out later.” It became a very embarrassing moment. I told them, “Hey look. You’re just going to have to put it to our room. We’re going to have to go deal with it at the front counter.” We left and there were charged hanging over at the end that they pulled me out of line for. It was embarrassing. We went up. I took care of it. She checked her cards when we got home. There was an extra $900 charged up on her card from that cruise….

Fraudulent charges! We had to deal with that and this was all of the reasons why we were running into so much drama — financial drama on the boat. It was to us terrible. I don’t know if it was a mistake or what was going on. I don;t want to say that it was on purpose but in my opinion, you know, I can’t rule it out. We haven’t found out what the truth is of all of that yet but you know, we’re still dealing with that kind of drama. So we came back only to find out that I was fired. Patrick [Young] and I have not talked since. He’s not wanting to be friends. They hired another tribute guitar player to come in and cover — Bob Capka. Great guy — I know him. Really cool dude but you know, we’ve been just trying to figure it out ever since. I don’t love these guys any less. I am a little upset with them and as you can see by that post, Brandon [Cook] and I got into it. You know, maybe I handled that wrong and I will say that I did just to take it on myself. Musicians can be emotional people. We all are. I sent out an apology on Facebook to everybody. I don’t know if you saw that or not.”