Trixter and Tokyo Motor Fist guitarist Steve Brown, who occasionally fills in on guitar for Def Leppard, was recently interviewed by Ruben Mosqueda for KNAC. 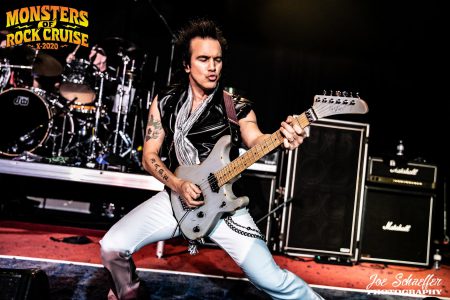 Back in 2014 and 2015, Brown replaced guitarist Vivian Campbell in Def Leppard for a number of tour stops while the latter was suffering from Hodgkin’s lymphoma snd receiving treatments. In May 2018, Brown replaced Phil Collen at a show at the Hersheypark Stadium in Hershey, Pennsylvania, USA on May 25, 2018 when the Def Leppard guitarist had a “family emergency” to attend to.

In terms of the biggest thing that he has taken from stepping in for Def Leppard, Brown indicated (with slight edits):

“The coolest thing about Leppard is the guys. They have been together for 40 plus years and they still share the same dressing rooms. I can’t tell you how many bands use separate dressing rooms and at times don’t even talk to one another. The organization from management to the crew to the band, they are all great people. The biggest take away is their humility that they have. They always have time for their fans to take a picture, say hello, and sign an autograph. They are great ol’ chaps! [laughs] They have people who have been working with the organization for 20 plus years and they are loyal to their crew. When I filled in Vivian [Campbell] or Phil [Collen] they took care of me like I was in the band. I traveled with them, I ate with them, I got changed with them, I was included. The only thing that I didn’t get was one of those Def Leppard bathrobes! [laughs] Hey guys if you’re reading this, I’m still waiting for that! [laughs] They are wonderful people and I’m proud to call them friends.”

With respect to filling in for Danger Danger, Brown stated:

“That came as an emergency type situation which has been my calling card as of late, the past 7-8 years with Def Leppard and playing with Dennis DeYoung’s band. In 2016, Danger Danger’s great guitar player Rob Marcello, who lives in Sweden, couldn’t make it to the U.S. for whatever reason. They had some gigs lined up and Bruno called me up and asked if I could fill in for the shows they had booked. I was the guy! Like I said earlier, if you need a guy that can learn 14 songs in two days, that can sing, look great, play great and fit in seamlessly, I’m your guy! I’m always there to help my friends. The Def Leppard guys are great to me. I have known Joe [Elliott]and Phil [Collen] since I was 17 years old! They are like family to me, they called me because I’m part of the family. Obviously, playing great and the ability to sing great helped. Everything that I have been doing, starting at the age of eight has led to this, me getting calls from people like Def Leppard, Dennis DeYoung and Danger Danger to fill in when they are in a pinch. There have been others, big bands that have called with emergency fill ins or they’re having problems with band members, which I can’t and won’t mention. I’m always there when someone is sick or has a family situation, ready to go, because as they say “the show must go on”.”

You can read the rest of the interview with Steve Brown by Ruben Mosqueda at KNAC‘s website.