Former Autograph guitarist and original member Steve Lynch has paid tribute to his ex-bandmate Randy Rand who sadly passed away yesterday at the age of 71. 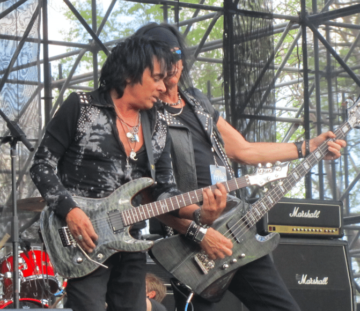 “Today I learned of the passing of my band brother Randy Rand, and spent the day reflecting on this profound feeling of loss. Since starting the band in 1983 I’ve had to say goodbye way too soon to bandmates Steve Isham and Keni Richards, but losing Randy hit me differently, a passing of time and friendships and an ending to the Autograph era.

There’s no way to describe the bond that is built when you’re a struggling musician forming a new band and traveling from gig to gig making music together – it transcends time, defies logic, and leaves you exhausted and exhilarated at the same time. Somehow the five of us, misfits as we were, collectively created a sound that was unique, and even decades later when ‘Turn Up The Radio’ is playing something undeniably special happens. It’s euphoric.

I spent time today talking with Steve Plunkett, Autograph’s original vocalist, vacillating between how final this feels, but still laughing about the mischief we all left behind. The passing of one of our final founding members marks the ending of the band and Autograph’s legacy. I cherish each of these talented brothers and honor what we created and shared with our fans. I take comfort in knowing that Randy was met today at the pearly gates, (running late per usual) by Isham’s big friendly grin as Keni tosses him a bottle of Jack yelling: “What took you so long bro!” We had a tradition before each show of placing our hands in a circle and on the count of three exclaimed in unison: “Let’s Rock!!” It became our mantra, our moment to acknowledge the dream we realized together, our act of solidarity. Until we reunite and ROCK again, cheers my brothers!

To Randy’s wife Regina and their families, I send my deepest sympathies. I can’t even begin to imagine what you’re going through at this difficult time. Regina, you were the love of his life as he was yours. Where there is profound love there is indeed profound loss. But your memories will bring comfort as I know he will always be with you.

To Jimi Bell, Mark Wieland and Simon Daniels (Daniel Simone), I send my best wishes as you pursue other musical ventures or transition into continuing as a tribute band to Autograph.

In love and peace,
Steve“

Back in late July 2019, Lynch announced that he was leaving Autograph which left Rand as the only original member left in the band. If the remaining current Autograph members consisting of frontman Simon Daniels, guitarist Jimi Bell and drummer Marc Wieland were to forge ahead as Autograph now that Rand has passed away, and presumably without Plunkett or Lynch in the line-up, this would mean that Daniels, who joined the band in 2013, would be the current member with the most tenure in the group.