With Doro celebrating the 30th year anniversary of the release of Warlock‘s Triumph And Agony album by playing select shows around the world, guitarist Tommy Bolan has joined her for the celebration. 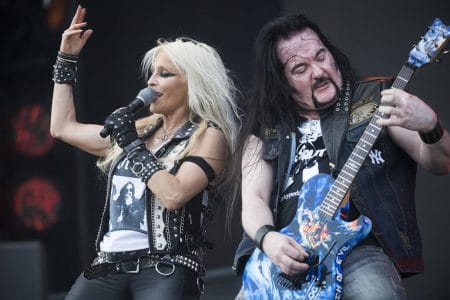 In a recent interview with Metal-Rules, Bolan was asked how the reunion idea came about to which he stated (with slight edits): “Doro called me like last November, and she said, would I be interested in playing because, you know, Triumph And Agony, this is the anniversary year and would I be interested in doing some shows.I said, “Yeah. That would be great.” Because the album, it always had such an impact on the Warlock community and the fans. I mean, my career started with that, you know, that album is a moment in my life I’ll never forget. I always remained friends with Doro; we made some great songs together, we always had chemistry. If you listen that record, my guitar, and her voice answer each other almost all the way thru and that’s the way it went with us, and it was always a great vibe. So, when she called and said she wanted to do it, I said, “Absolutely.”

In terms of inviting the other Triumph And Agony era members to join the shows, Bolan advised: “Doro has a great band, great guys working with her. I believe that the idea was to celebrate the album, because of the anniversary and, I guess, you know because I worked very closely with her and the producer Joey most of the time while the album was recorded. It was us 3 in the studio for many nights… All the lead guitar/riffs were me, and I did the majority of the rhythm parts too. I guess the timing locked in, and the vibe which she wanted and I just think, it worked, it came together really good.”

In regard to at least having Alice Cooper guitarist Tommy Henriksen being included, Bolan stated (with slight edits): “He’s real busy with Alice Cooper and stuff like that. You know, I think to celebrate the album, this really came together and we feel good. We’ve got more shows coming, so I feel really confident that this really represents the sound and feel of Triumph And Agony and what it was about.”

With respect to Bolan‘s future with Doro, the guitarist stated (with slight edits): “Well, there’s more Warlock talk. I mean, we’re playing Norway, and then we’re playing a whole bunch of US dates, and I guess it depends on promoters etc etc but the fan reaction has been thru the roof online and at the show and the vibe of the whole band is totally rockin and positive. You were saying and telling me how you love the show and this and that. Well, if that buzz goes around and that gets going, then obviously, you know, that will create the demand. As long as the music is real, and the fans dig it, and there’s, you know, a place to rock it, I can’t see why not. I mean, of course, she’s always got her solo project. She’s got that and, of course, her band is part of this. These are great guys, and they’re great musicians, so it works pretty well.”

You can read the rest of the interview with Bolan at Metal-Rules.

Warlock‘s “All We Are” video:

Warlock – All We Are (Official Video HD)