Lafon sent over a photo to Skeoch dating back to 2004 and pointed out that the duo had not spoken since that time. Skeoch replied (as transcribed by Sleaze Roxx): “Since around when that picture was taken I think… That was probably one of the last times that I saw you. I know because after 2006, I went into hibernation. [I] was a recluse for ten years.” 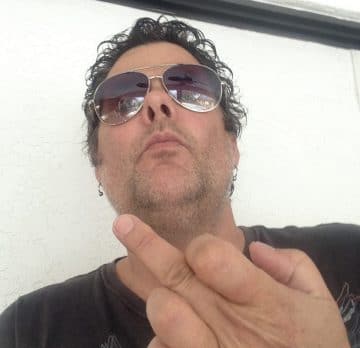 In terms of his “hibernation”, Skeoch stated: “So let’s see, about — let’s say about — somewhere like before we made, somewhere around ’93-’94, I started like delving into some really hard core dope and shit like that and we put out Bust A Nut, and that’s kind of when the grunge thing was going. So there was just a lot of like, the planets were just weird like that for me at the time or wherever. The stars, whatever you call it you know. So, I left and then the band fell apart. They were all decrepit and everyone was just all pissed. And then me and [Tesla frontman] Jeff [Keith] got back together in about ’99. I put a band called Bar 7 together… And we did that for a while… But you know, we were just trying to make a living and make some new music, and do what we do you know, so we did that.

And the whole time, I was still getting pretty jacked up. You know, I guess maintaining enough to work. So we did that and then Tesla — me and Jeff were out there — and I think that they wanted to get back together so we ended up doing that. We ended up doing not just a reunion show and that turned into five years of kind of touring and making another record Into The Now, right? And then so things were pretty chill then and I then kind of — I don’t know what happened to me man. I just kind of got sick of fucking everything man, started doing it fucking hard man, going hard and that was it man. I just was not, I just wasn’t having it and they weren’t having me. I was getting really fucked up and it was like you know… They just wanted to keep it like you know, ‘Tommy‘s going home to hang with his family.’ I don’t know why they wanted to avoid conflict or anything like that. Not that it’s conflict but it’s something that they look at as negative and it’s just is what it is you know.”

Skeoch went on to say: “I mean, it’s very complicated of course you know.”

With respect to when he straightened out, Skeoch indicated: “So I left the band in 2006 for the last time and that whole five or six years man, it just got worse. I just got fucked man, just crazy right. And then somewhere about, so it’s been about, 10, 12, 13 years. I don’t know what it’s been. Somewhere about like maybe five years ago, I was kind of — I don’t know man — I was just kind of. I feel like I was kind of killing myself a little bit and I started getting worried about myself because I was so fucked you know. And I fought. Now, I haven’t stopped completely. I don’t do AA. None of that shit. Now, I just smoke cigarettes, maybe some weed and have a drink every now and then, but I don’t do smack because that’s the thing that really towards the end, that’s what I was doing.  It fucked me up.”

Skeoch added: “But you know what, that’s OK and I don’t mind talking about it because you know what, a lot of people wonder what went down ’cause it was never really told and I’ve never, don’t think that I’ve ever fully explained it in interviews a little bit… But it’s all good… It’s not like some dark weird thing for me.”

In regard to a possible relapse into the harder drugs and whether he’s over the temptation, Skeoch opined: “Yeah. Totally. I don’t want to do that no more man. It was killing me. It’s just not something that I am interested in doing anymore.”

In terms of reuniting with Tesla again, Skeoch indicated: “I guess, I don’t really… I don’t want to go there. I’m just like, ‘Man, I’ve got this thing that I’m doing that’s just so awesome you know.’ I don’t even think of that kind of thing. I used to. Before I was doing this with them, I might have thought, ‘If they ask me, I would do it.’ or something like that. But now, where my head is at, it’s just in a different place so I’m not really down with that.”

You can listen to the interview with Tommy Skeoch by Mitch Lafon on the Rock Talk with Mitch Lafon podcast below: