Chris Dale‘s Metal Meltdown has posted an interesting and lengthy article on Metaltalk.net on the guitarists that may or may have not auditioned for KISS back in 1982 when Ace Frehley was on his way out of the band. The article is entitled “Undiscovered KISStory – The KISS guitarist auditions of 1982 Part 1 …and the mystery of who actually played guitar on the Creatures Of The Night album. 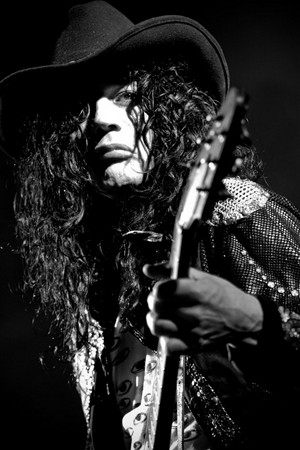 One of the articles cited in the MetalTalk.net article is none other than an interview done by Sleaze Roxx with Adam Bomb back on June 9, 2011 where Bomb states: “I read an ad in Billboard magazine that ‘a major group is looking for a guitar player’. I sent a tape to them with the TKO songs, a photo and a bio and then Paul Stanley called me. I think they already had Vinnie Vincent but were checking out more people. First of all they werelooking for six foot tall guys that were at least over twenty years old — at this time I was 17. I met KISS and we played a few songs together like “Detroit Rock City”, “Firehouse”, “Calling Dr. Love” and “Black Diamond”.

Bomb went on to state: “I was 17, I was a baby. Look at me now, I was shorter than Eric Carr. I did my guitar solos with them but I wouldn’t have been a good fit becauseI did a few drugs and went on the dark side while KISS was a serious band with all the things they have to do.”

With respect to Yngwie J. Malmsteen, the article in Metalktalk.net states:

“Let’s get this one out of the way first off. Despite the rumours, the Swedish guitar god did not audition for KISS. Can you imagine Yngwie calming down enough to do the solo in ‘Detroit Rock City’?

That would be ridiculous, wouldn’t it? But ridiculous or not, KISS did actually consider him for an audition. One of the people Gene and Paul asked for

recommendations of guitarists was Shrapnel Records boss, Mike Varney. Mike had a reputation for finding guitarists and had just discovered the young Yngwie through demo tapes he had been sent from Sweden.

Mike told KISS that this kid was really something special. So they decided to check him out. This is how Yngwie told the story to the Glam-Metal website:

“I remember once, when I was living in Sweden and I got a phone call from KISS. It was so funny because it was like ‘Yeah we hear that you are really, really hot’ and I’m like ‘I don’t know, it’s quite cold here.’

“I had no fucking idea what they meant at the time. There was a real communication problem there.”

Inevitably, based on that conversation KISS didn’t invite Yngwie to fly to California for an audition. Instead Yngwie went on to become famous as one of the most over the top guitar players of his generation and as a solo artist he has sold over 50 million albums worldwide.”

To read the full article and get details on whether each of the guitarists mentioned above auditioned for KISS please go to  MetalTalk.net.