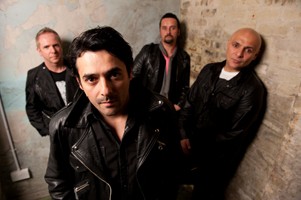 Gun Prepare To ‘Break The Silence’ On June 11th

Scottish rock band Gun will release their new album ‘Break The Silence’ on June 11th through earMusic, Edel’s international rock label. A free download of the demo track “Last Train From Central”, taken from the band’s recent recording sessions in Glasgow, is available at www.gunofficial.co.uk.

‘Break The Silence’ is produced by Dave Eringa, the mastermind behind artists such as The Manic Street Preachers and Ocean Colour Scene. The collaboration resulted in a perfect balance between a modern approach and a vintage energy reminding at times of The Stooges or early Stones — the perfect sonic dress for Gun’s inspired and versatile songwriting. Not just another exercise in nostalgia, but an album that ‘had to be made’, made of songs that were too good not to be heard.

New and old fans will have more than a chance to see Gun’s energetic live show. Gun fans will certainly agree it was worth the wait: the eleven songs forming the new album reminds of some of the greatest rock albums. No fillers, power, energy, refined and rough at the same time.

Front man Dante Gizzi has expressed his enthusiasm about the new album, “It’s great to be back and we’re really pleased to be working with earMusic. We’ve always felt we had unfinished business as Gun and we couldn’t be happier with the tracks we have on our new album! We can’t wait for people to hear it and we can’t wait to be out on the road again!”

The band has recently toured with Big Country all over the UK and have plans to play live in the UK at some of the biggest festivals and together with The Cult all over Europe.

Formed in Glasgow in 1987 by the Gizzi (Dante and Jools) brothers, Gun came to re-invent the rock ‘n’ roll genre. Their debut album, ‘Taking On The World’, brought with it many successful singles, appearances, and guest slots with acts such as The Rolling Stones, Bon Jovi, Simple Minds, Bryan Adams and Def Leppard.