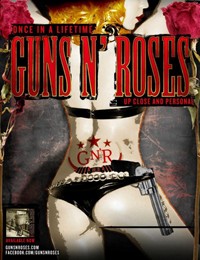 Fresh from their critically acclaimed, sold-out-in-minutes New York Takeover and subsequent intimate run of shows along the eastern seaboard, Guns N’ Roses will be taking over Los Angeles in March with a three-date club run.

It’s been 22 years since they last visited the Hollywood Palladium, where they have set their first stop on the L.A. run on March 9. Guns N’ Roses will make their first appearances at two L.A. music landmarks, The Wiltern on March 11, and House of Blues Sunset Strip on March 12.

Presale for the L.A. Takeover will begin on Thursday, March 1st at 10am PT, public onsale is slated for Friday, March 2nd at 10am PT. For more information on tickets and VIP packages, please visit www.gunsnroses.com.

Guns N’ Roses have just returned from their sold-out global 2011 arena tour, with more than 30 shows in the US, visits to Latin America and multiple festivals, having played to millions of fans around the globe. In April 2012, Guns N’ Roses will be inducted into the Rock and Roll Hall of Fame.