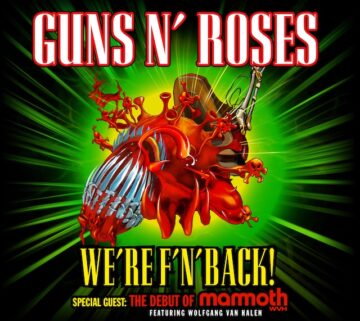 Given that the city of Toronto in Canada has had an indoor dining ban for over 365 days since the start of the Covid pandemic, it is no surprise that Guns N’ Roses have elected to cancel their lone tour stop in Canada this summer. Guns N’ Roses were scheduled to play the Rogers Centre in Toronto on July 26, 2021 but the following message was posted on the group’s Facebook page earlier today:

“Canada family, we are forced to cancel our Toronto show for this year. Stay tuned for updates, we can’t wait to be back

Nevertheless, Guns N’ Roses will be embarking on a comprehensive tour of the United States of America starting on July 31, 2021  with the opener being Van Halen bassist Wolfgang Van Halen‘s new band Mammoth WVH.

More details can be obtained at Guns N’ Roses‘ website including tour dates for New Zealand / Australia in November 2021 and for Europe in the summer of 2022.