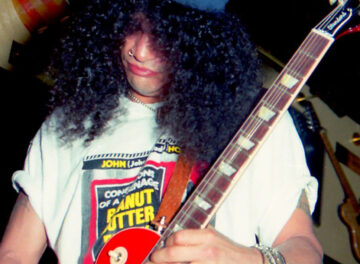 Guns N’ Roses historian Marc Canter was recently interviewed by Andrew DiCecco for Vinyl Writer Music. Canter was promoting his new video podcast The First 50 Gigs: The Making of Appetite for Destruction that he created along with Jason Porath. 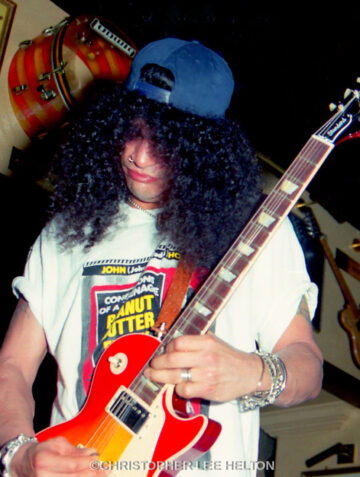 In terms of how he determined who to speak to and who to omit from The First 50 Gigs: The Making of Appetite for Destruction, Canter indicated (with slight edits): “Well, we got the guy from London, Nadir D’Priest, because I remember when Slash first joined Hollywood Rose and Izzy [Stradlin] exited really at the same time as Slash joined. But Slash wasn’t replacing Izzy; Slash was replacing Chris Weber. But Izzy bolted at that same time. Maybe he wanted Tracii [Guns] – I’m not sure where Izzy’s thoughts were – but he joined London. Then after Izzy was out of London, I remember Slash and Steven [Adler] were in London for like three or four weeks. And I knew that Nikki Sixx was in London. So, I figured, “You know what? London had three of the Appetite For Destruction members pass through that band. So, it’s worth talking to Nadir to see what he might have to say about that.” So, you start to think, “Who can help us?” Even if it’s just something that we didn’t get the first time when we did the book. You have more room for that.

Even me; when I was putting together that book, my thoughts were always, “Once it’s designed, I’ll look at it and I’ll add some texture to it.” And it never happened, because we interviewed a bunch of other people; the roadies; the girlfriends; Tom Zutaut [A&R] and Mike Clink [producer, engineer]; the guys that mixed it. So, when you add that all up – and you add up all the original band members from Slash’s first band, and everyone has something to say – there was no place left to add anymore text. So, I didn’t get to do it. Now, as we go through the shows, which we haven’t even gotten there yet – the first season ends pretty much at Hell Tour – I have a lot more to say about each show. So, as we go through the shows, I can then do what I planned on doing in the first place and try to give it a little more texture and information. Like, what was going on at the time when they debuted “Welcome to the Jungle” or “Paradise City.”

Also, there’s so many other things that aren’t in the book. Like Slash barely remembered this – I saw him a couple of weeks ago – and first he said he didn’t remember, then he said, “You know, I vaguely do remember that.” Paul Stanley called Slash when he was seventeen and interviewed him to join KISS when Ace Frehley left. But Paul doesn’t even know this, ‘cause all Paul knows is that he called some kid; he had no idea the kid was Saul Hudson. And how did he get that number? Because Slash was working at a Hollywood music store, and the owner saw that in between no customers, Slash would plug into something and noodle around. So, the owner saw that Slash was extraordinary, and when he found out that KISS was looking for a guitar player, he recommended Slash.

So, Paul Stanley called him, but Paul knew he was only seventeen, and that could be a problem legally. I’m not saying there aren’t musicians that are underage – there are – but touring with KISS can be a liability. You don’t know what could happen with a seventeen-year-old kid. So, Slash made it through the phone interview, but they never took a look at him. They never had him come down, learn a few songs, and see what he had. Had they done that, Slash would have probably been in KISS and Guns N’ Roses may have never happened. That’s the joke of it. So, it worked out. Paul Stanley was asking, “Would you be able to tour? Are your parents cool with that? Could you record?” He was asking him the right questions, but he just never got to the next level and Vinnie Vincent was hired, and that was the end of that. There are stories like that that got lost and never made it into anything. They’re interesting stories. There’s a number of them, and they’ll come up as we get to the gigs.”

You can read the rest of the interview with Marc Canter at Vinyl Writer Music‘s website.