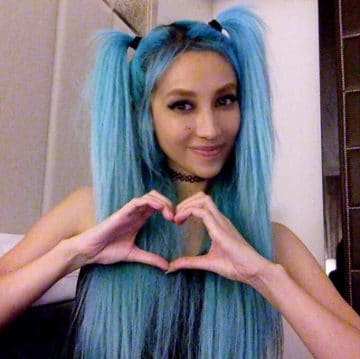 The following are excerpts from the article/interview by LA Weekly:

“The guys call me Blue,” Melissa Reese says. The blue-haired, classically trained composer is kicking back in holographic sneakers at her home in Larchmont, on break from touring with the guys: Guns N’ Roses.

Outside of her work with GNR, Reese composes for TV, film and video games at breakneck speed. Her work has appeared on Fox, The CW, E! and Sony PlayStation franchises like Infamous. To keep up with her deadlines, she takes a mini recording studio with her on tour. “When I get offstage, the first thing I do is go back to the hotel and set up my rig.”

Before a gig, she’ll eat a box of See’s candy, topped with Diet Coke, which helps her get jacked for a three-hour set. In New Jersey, she puked. “I didn’t know what to do! I swallowed it because I didn’t want it all over my rig.” The crew gave her a blue bucket matching her mane, which has become GNR cosplay. In Mexico, black-market vendors outside shows hawked blue wigs. “Little girls waited in hotel lobbies to tell me that they played piano because of me, which warmed my heart.”

It’s been a year since Reese joined GNR as keyboardist and backup vocalist. She had two weeks to prepare for the reunion tour, spending 15 hours a day in the studio mastering 50 songs, and zoning in on rock’s mightiest instrument: “I studied Axl [Rose]’s phrasing like a hawk.”

You can read the rest of the interview at LA Weekly.