The legendary Guns N’ Roses are in the midst of their ‘Not In This Lifetime’ tour and have pulled a number of surprises thus far including guest appearances by ex-Skid Row frontman Sebastian Bach, AC/DC guitarist Angus Young and former Guns N’ Roses drummer Steven Adler. 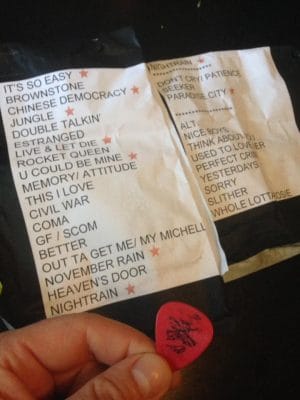 What can also be deemed quite surprising is having guitarist Slash and bassist Duff McKagan play a number of tracks from the Guns N’ Roses‘ album Chinese Democracy even though both had been out of the band by that point for more than a decade.

Guns N’ Roses‘ setlist for their ‘Not In This Lifetime’ tour has been the source of some criticism including from Sleaze Roxx who stated in its concert review of GNR‘s Toronto tour stop on July 16, 2016: “So what went wrong you may ask? In a nutshell, the setlist that was played simply killed the band’s momentum over and over again throughout the evening.”

Sleaze Roxx went on to state: “What I began to realize was that any track from the raw and 30 million seller Appetite For Destruction was very well received, almost any track from Use Your Illusion I or II was well received but many of the songs’ intricate arrangements lowered the crowd’s energy levels somewhat, and any other song played (aside from the encore “Patience”) really sucked the wind out of the crowd.