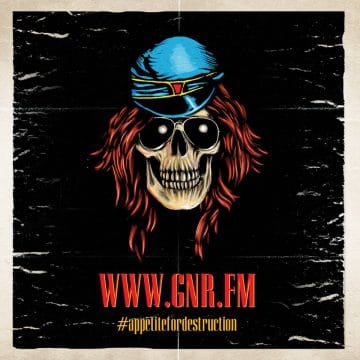 Guns N’ Roses have a new website gnr.fm with the caption “Destruction is coming” and a countdown leading to some sort of announcement on May 4, 2018. The same caption was posted on the group’s Facebook page earlier today.

Rumour has it that Guns N’ Roses will be releasing some sort of deluxe edition of their best selling album and full-length debut Appetite For Destruction.

Sleaze Roxx stated the following in its review of Appetite For Destruction back in December 2006: “Appetite For Destruction is an album that gives meaning to the old cliche; sex, drugs, & rock n’ roll. The album is dripping with sass and angst, and grabs you by the balls and never lets go, starting with Slash‘s opening riff on “Welcome To The Jungle”. The track features Axl‘s signature screech and explains the L.A. lifestyle perfectly, “If you got the money we got your disease”. It’s almost a perfect song; it’s raw and covered in sleaze….

This is a record that should be in any sleaze rock fans collection, if its not can you really consider yourself a sleaze fan? The first six songs alone are some of the best music ever heard in the rock industry & there haven’t really been too many albums that are better than it in my opinion. So, if for some odd reason you don’t own this, then get your ass up & go buy it because you are seriously missing out.”