Guns N’ Roses to play in St. Louis for first time since 1991 riot at Riverport Amphitheatre

Guns N’ Roses guitarist Richard Fortus was recently interviewed by the St. Louis Post-Dispatch, who indicated that the group’s Not In This Lifetime tour has grossed over $230 million since April 2016. 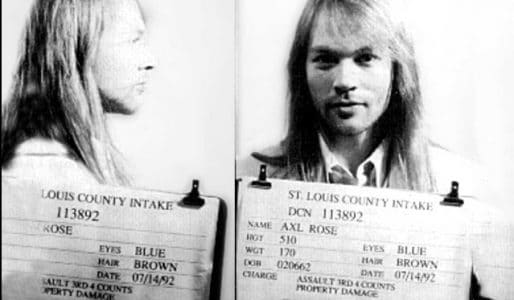 There’s also a lot of excitement surrounding the St. Louis show in particular. Guns N’ Roses last played here in 1991, when its “Use Your Illusion” show at Riverport Amphitheatre (now Hollywood Casino Amphitheatre) was marred by a two-hour melee that ensued when Axl Rose dived into the audience to tackle a spectator who was photographing the show. The band abandoned the stage, and audience pandemonium ensued, resulting in at least 75 injuries, 13 arrests and at least $200,000 in damage to the brand-new venue. Police estimated that 3,000 of the 15,000 fans participated in the riot.

Rose was charged with four counts of misdemeanor assault and one count of property damage. A judge ordered him to pay $50,000 to five St. Louis charities. He also faced civil suits from individuals and the amphitheater.

“It was a series of unfortunate events that led to what happened,” Fortus says. “I would imagine (Rose) must be apprehensive, though he never expressed that to me, so I don’t know. But I know some people here are apprehensive. People lost jobs because of what happened. Some people are like, ‘(Screw) that guy, I’m not giving him my money.’ I get that.”

But he says there aren’t a lot of great rock bands left. “I wouldn’t want to miss it. There’s not another show like it, and it’s going to be an event. And it has been a long time.”

It has been just as long for Guns N’ Roses. “Everyone was traumatized. It was no little deal for them — not just another night at the office.”

One big question is whether Rose will mention the Riverport riot onstage.

“Knowing Axl, I would imagine so,” Fortus says. “But I have no idea. If nothing else, he’s gonna make a joke.”

You can read the rest of the article at the St. Louis Post-Dispatch.