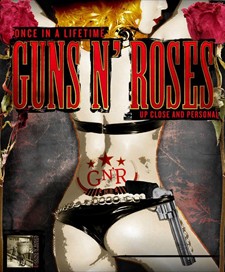 Guns N’ Roses will stream this Sunday’s concert at Chicago’s House of Blues live online, the band announced on Friday.

According to Billboard.com, a $5 fee will provide access to a live stream of the show via the band’s website at http://gunsnroses.com, with a portion of that going to support hunger relief organization Feeding America. Guns N’ Roses are set to take the stage at 11 p.m. CT.

Fans can expect their money’s worth: the band has been playing lengthy sets on its current club tour, playing a two-and-a-half hour gig in New York on February 10th. They’ll launch a European tour in May.

The iconic group’s original lineup will reunite at the Rock and Roll Hall of Fame induction ceremony on April 14, though it remains to be seen if its past and present members will perform together once more.

“I know that all the original band is going to be there,” keyboardist Dizzy Reed, the longest-standing member of the current Guns N’ Roses and an inductee that night, tells Billboard.com. “I don’t know exactly what’s going to go down. It’s one of those things I’m sure will all come together and be really cool. I’m just going to go in with a good attitude and a clear head and a grateful heart.”

Fans have been abuzz about whether the GNR crew — which will also include continuing frontman Axl Rose, guitarists Slash, Izzy Stradlin and Gilby Clarke, bassist Duff McKagen and drummers Steven Adler and Matt Sorum — would put aside well-publicized differences at the ceremony and pick up their instruments together. Nobody has said for sure what will happen, and Adler has even expressed open doubts about the possibility. Reed, meanwhile, says it’s not even been a topic of conversation between he and Rose since the Rock Hall’s class of 2012 was announced in December.

“Honestly, we haven’t spoken about it,” Reed says. “I don’t know when or why or how to bring it up. It’s not an every day sort of thing. So we haven’t really talked about it — but I’m sure we’ll have to at some point.”