Guns N’ Roses’ warm up gig at the Whisky A Go Go? 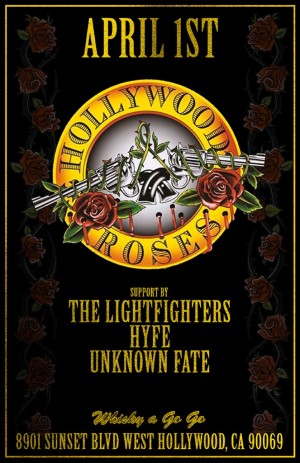 About a week after cancelling Adler‘s gig on April 1, 2016, the Whisky A Go Go have booked the Hollywood Roses instead as the headlining band to play on that night.

Back on March 1, 2016, the Whisky A Go Go posted the following tweet on its Twitter account yesterday stating: “The Steven Adler show on 4/1 has been canceled. Stay tuned for a big announcement ! #GunsNRoses.”

Rumours have been flying for some time that Guns N’ Roses will be playing a warm up gig prior to their first official “reunion” gig at the T-Mobile Arena in Las Vegas, Nevada, USA on April 8, 2016. What better spot to have a warm up gig than at the infamous Whisky A Go Go on April 1, 2016 under the name “Hollywood Roses.” Is this an April’s Fool joke, an actual gig for a tribute band or the real thing? Only time will tell. Of note, tickets are only available at the door for the Hollywood Roses‘ performance on April 1, 2016.

Although no formal announcement has been made for the entire Guns N’ Roses‘ “reunited” line-up, singer Axl Rose, guitarist Slash and bassist Duff McKagan will definitely be a part of it and it is anticipated that guitarist Richard Fortus, keyboardist Dizzy Reed and drummer Frank Ferrer will be rounding out the line-up. Steven Adler has remained quiet despite his band Adler‘s gig at the Whisky A Go Go being cancelled for no apparent reason.