Gunsmoke to release new EP ‘Down ‘N Dirty’ on May 5th

Swedish rockers Gunsmoke will be releasing their new five-track EP Down ‘N Dirty on May 5, 2022. 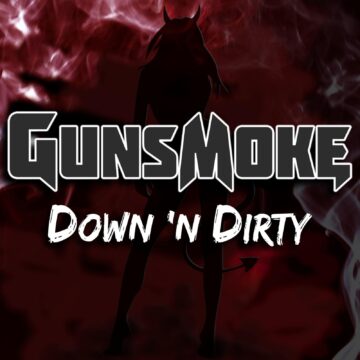 “Gunsmoke are five Swedish childhood friends from the suburbs of Stockholm, who still enjoy each other’s company immensely. Together, they make down and dirty rock’n’roll with life-affirming riffs, groove, attitude and a mischievous twinkle in the eye. Now it’s time for their 5-track EP, Down ‘n Dirty.

After having played together in various configurations, the early Nineties saw the guys starting an AC/DC tribute band that has also gone under the names Rockafellas and Backseat Rhythm. Cousins Fredrik Christoffersson (vocals) and Joachim Handin (guitar), brothers Patrik ”Pata” Tell (drums) and Markus Tell (guitar) and Patrik ”P. J.” Johansson (bass) – immediately started making a name for themselves. Before long, they were gigging in and around Åkersberga, where most of them come from, as well as Stockholm and Uppsala. When original drummer ”Pata” left in 1993, the band carried on, gradually adding original songs to their setlist. ”We soon discovered that people thought our own songs rocked just as hard – they often didn’t even realize that they were own songs! So, they became part of the show” Fredrik remembers.

Over the years, members started families, and band activities sometimes took a backseat. However, children grow up, and suddenly there was more time for making some riff-tastic noise. When Pata decided to return home, he was immediately welcomed back into his old band of brothers (and cousins). ”We’d missed his presence. I had also missed him as the other half of the rhythm section”, says P.J. Pata’s return gave the band a shot in the arm. ”I hadn’t played drums for a long time and realized that I had missed it immensely. I have many passions in life, but playing live with these guys beats everything”, the drummer beams.

In spite of their reputation as a live act, they had yet to release original music, so the band – by now known as Gunsmoke – recorded two songs, “A Loser’s Game” and “Don’t Steal My Thunder.” After having mixed the tracks, they asked producer and recording/mix engineer, Johan Eckerblad, to do the mastering. He soon realized that, in order to reach the sound they were after, he needed to remix the songs as well. Both songs were released on all major streaming sites in 2019.

When it started looking like the pandemic was fading, the decision was made to record five songs for an EP, Down ‘n Dirty, and the band asked Johan to oversee the entire production. This time, Gunsmoke were recording in a familiar environment: their own rehearsal space. ”The playing was great on the first single, but you could sense that a recording studio wasn’t their natural habitat. They were on their toes, but you could also sense some tight shoulders”, says Johan.

All backing tracks were done in one take, the musicians playing together in one room. This way they were able to look each other in the eye and find an organic groove. Solos, lead vocals and backing vocals were immediately added to give everything a sense of immediacy. “Gunsmoke have the songs, the groove, a great lead singer, and two guitarists with their own personalities. The dish was already well-made, I just added some spices”, Johan enthuses.

The members make no bones about the fact that many of the songs could have been written by a certain Australian band. They do, however, feel that their own personalities are in there as well. The lyrics, all written by Fredrik, revolve around demons, dirt, revenge and rock’n’roll. Tender topics, served with a smile. This is a band whose members don’t take themselves too seriously.

So, what’s next for Gunsmoke? The answer is loud and clear: More songs, more shows and more serious fun. Now, crank up the volume until the neighbours bang on the door, probably bringing a case of beer.

You can check out more about Gunsmoke via their Facebook page.