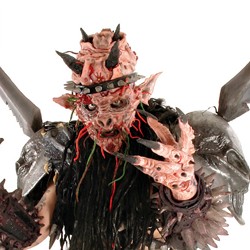 GWAR founder and vocalist Dave Brockie, who performed under the name Oderus Urungus, has passed away at the age of 50.

Jack Flanagan, manager of GWAR has issued an official statement, “It is with a saddened heart, that I confirm my dear friend Dave Brockie, artist, musician, and lead singer of GWAR passed away at approximately 6:50 PM EST Sunday March 23,2014. His body was found Sunday by his band mate at his home in Richmond, Virginia. Richmond authorities have confirmed his death and next of kin has been notified. A full autopsy will be performed. He was 50 years old, born August 30, 1963. My main focus right now is to look after my band mates and his family. More information regarding his death shall be released as the details are confirmed.”

“Dave was one of the funniest, smartest, most creative and energetic persons I’ve known,” former GWAR bassist Mike Bishop told Style Weekly. “He was brash sometimes, always crass, irreverent, he was hilarious in every way. But he was also deeply intelligent and interested in life, history, politics and art. His penchant for scatological humors belied a lucid wit. He was a criminally underrated lyricist and hard rock vocalist, one of the best, ever! A great front man, a great painter, writer, he was also a hell of a bass guitarist. I loved him. He was capable of great empathy and had a real sense of justice.”

GWAR’s 2013 album ‘Battle Maximus’ was the band’s first full-length studio effort since the loss of their longtime guitar player Cory Smoot (Flattus Maximus), who was found dead on a tour bus in 2011 while crossing the border into Canada. Other albums from GWAR include 1990’s ‘Scumdogs Of The Universe’, 1992’s ‘Scumdogs Of The Universe’, 2004’s ‘War Party’ and 2010’s ‘Bloody Pit Of Horror’. GWAR has been nominated for Grammys twice during their 30-year career, receiving a best long-form music video nomination for ‘Phallus In Wonderland’ in 1992 and a best metal performance nod in 1995 for ‘S.F.W.’

“This album is both a tribute to Flattus and a telling of the next chapter in the story of GWAR,” said Oderus Urungus at the time of ‘Battle Maximus’ release. “The combo of the brand new album and show should satisfy even the most hardcore Flattus devotee with the fact that GWAR’s slay-skills are as supreme as ever, and the band stands poised to embark on our most earth-shattering world tour yet. We have mourned, we have honored, and now it’s time to fucking devastate in the name of Flattus and the supreme entity that is GWAR.”

GWAR is a group of alien monsters who were banished to Earth millions of years ago as punishment for their cosmic crimes. GWAR was frozen in the wasteland of Antarctica, to wait for the cosmic summons that would herald their return to the stars. But fate intervened, and GWAR was de-thawed by global warming.

Led (poorly) by pig-nosed lead singer Oderus Urungus, they began wandering the world, where they were quickly discovered by music mogul and mob boss Sleazy P. Martini. Transformed into the ultimate heavy metal band, they set about the business of destroying the human race with this savage sound, throwing great ‘concerts’ where thousands of humans would be lured to their deaths. But this commotion would not go un-noticed in the vastness of the cosmos, and soon GWAR was under attack from a huge variety of both super and not-so powered adversaries. A GWAR show will see slaughter wrought upon anything within sword’s reach as GWAR defends their blood-soaked crown of metallic opulence from the legions of the lame that would seek to sully such things, and deprive YOU of the sick fun you so desperately need, need to make existence in this diseased and miserable world somehow bearable, even with an axe through your skull.